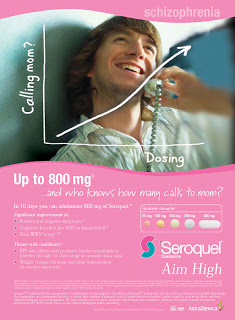 Bnet journalist Jim Edwards cites the Seroquel professional ad shown on the left and suggests that it is implying that “If Calling Mom Makes You Hear Voices, Then AstraZeneca Has a Pill for You.” That’s the headline of his article (see here), which is what all the search engines and blogger critics are going to pick up (ie, this PhamaGossip post).

Edwards immediately waffles and says the ad may be making one of these two claims: “…calling your mom [can] worsen your symptoms if you’re a schizophrenic… Or … taking antipsychotic medicine [can] help you to remember to call your mom more often.” The headline clearly underscores which of these Edwards favors.

Further down in the article, Edwards says “The ad shows a chart with two variables, ‘Calling mom?’ and ‘Dosing.’ The line between them indicates that more you call her, the more Seroquel you’ll need to deal with the mental fallout.” He does admit an alternative, which he “guesses” was AZ’s intent; namely, “the chart shows that the more Seroquel you take, the more you’ll be psychologically stable enough to call her.”

Small point. But if you are going to write about the pharmaceutical industry, you need to understand the science before you start criticizing. Fortunately, I have a graduate degree in biochemistry and am a math buff.

You cannot blame Edwards for not being mathematically astute enough to properly interpret this chart. He probably had the same “excellent” grade and high school education in science and math as my kids. A case in point: my son, the mechanical engineer. In a grade school math homework assignment he was asked to plot a series of “ordered pairs,” which look like these: (1,1), (2,8), (3, 27), etc. How would YOU plot these? Which number in each pair is plotted on the Y-axis and which on the X-axis?

My son was plotting it the “alternative” way, which I indicated was the wrong way. He countered that his teacher said either way was OK! I blew up and ordered my poor son tell his teacher that she was wrong. I don’t know if he ever did muster up the courage to do that. But form that point forward I pushed him to take AP math in high school to keep ahead of the math dummies being churned out by our schools.

Enough of my ranting about our educational system!

The thing that I find interesting about the chart in this ad is the question mark (“?”) attached to the dependent variable (ie, “Calling mom?”). I suppose this was added to appease the FDA regulators who might otherwise object that the chart is making an unsubstantiated, off-label, claim; ie, taking Seroquel will lead to more calls to mom. The question mark emphasizes that this is just conjecture. However, perhaps the FDA reviewer may be mathematically inclined to ignore that “?” and slap AZ with a warning letter anyway.

My “Ice Bucket” Challenge: Donate to a Different Cause to Improve...