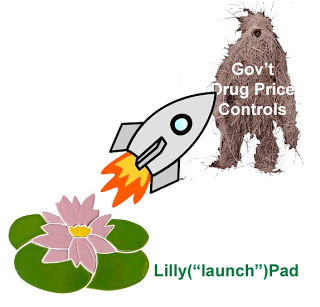 Eli Lilly, the drug company that increased the price of its antidepressant Cymbalta by 13.6% in 2009, is using its new corporate blog (LillyPad) as a launching site for defending high drug prices (see “Why Price Controls Are Not The Right Answer“). This latest post was in response to a Washington Post article that articulated fears that drug companies would increase drug prices to cover the costs of offering Medicare beneficiaries a 50% drug discount when they find themselves caught within the infamous “doughnut hole” (see “Will Drug Companies Increase Drug Prices to Cover Medicare ‘Doughnut Hole’ Discounts?“).

Lilly’s response — written by Amy O’Connor, Notre Dame alumna, who “manages the intersections between the political environment and Lilly’s business portfolio” — interests me on several levels.

First, I now understand why Lilly chose the name “LillyPad” for its blog. My Twitter friend Andrew Spong criticized the name as a “an eye-roller, not an eye-catcher” (see here). Spong thought it might have something to do with TypePad, a “third-on-the-podium blogging platform.” Whatever the reason, said Spong, “it eludes me.”

But the main reason I was interested in writing about Lilly’s response was because it skirted the main issue raised by the Post article. While the latter was focused specifically on the drug industry’s partial coverage of the cost of medicine for Medicare recipients in the doughnut hole, Lilly’s post does not mention Medicare at all (except when it references the Post article in the opening paragraph)! In addition, Lilly mis-characterizes the theme of the Post article as highlighting “concerns that biopharmaceutical manufacturers will raise prices on prescription medications.” The remainder of Lilly’s post is an argument against government price controls in general.

In other words, Lilly has raised a straw man to knock down rather than address the specific issues raised by the Post article.

Lilly also engages in what I would argue are scare tactics, which are definitely aimed at the American consumer (but probably not Medicare recipients). “Did you know that price controls erode incentives to innovate?” asks Amy. “The question is… should we let the fear of the unknown undermine the future of our health care when so much is at stake? Shouldn’t we continue to invest in innovation so we can continue to see real improvements in health care?”

I am not sure what Amy means by “fear of the unknown,” except that she uses it to raise the issue of fear itself. It’s a nice way to associate fear with government control of prices.

Amy also selectively quotes data such as “From 2006-07, prescription drug prices increased only 1.7 percent.” She neglected to mention more up-to-date and relevant data such as “Drug companies sharply raised prices last year [2009], ahead of increased rebates they must pay to Medicaid and other expenses tied to the federal health overhaul passed last month…” (see Drug Prices Rose 9.1% Last Year, Ahead of Federal Health Overhaul). She also did not mention that in 2009 Lilly itself increased the price of antidepressant Cymbalta by 13.6%, according to data from Credit Suisse (op cit).

Finally, Amy cites cancer and AIDS drugs as specific examples of drug company innovations made possible by higher drug prices. Drug companies always the cite bogeyman diseases like cancer to bolster their case. I don’t particularly buy the argument because a lot of other factors are responsible for advances made in the treatment of certain cancers — better screening, for example. As Amy herself says, drugs represent only a small fraction of the costs of healthcare. Ipso facto, drugs also represent a small fraction of healthcare innovation.

Anyway, that’s my take on the rocket launched today from Lilly’s pad.

P.S. Of course, I submitted a comment to Amy’s post. While that awaits moderation, let me reproduce here for the record:

I think you are not addressing the actual issue raised by the Post article, which has to do with specific concerns about how the drug industry MIGHT finance its costs associated with Medicare doughnut hole coverage. You raise a “straw man” by focusing on government price controls in general rather than addressing the specific issue.

“I wrote up my critique on Pharma Marketing Blog (http://bit.ly/agUGuA) and hope you will respond.”