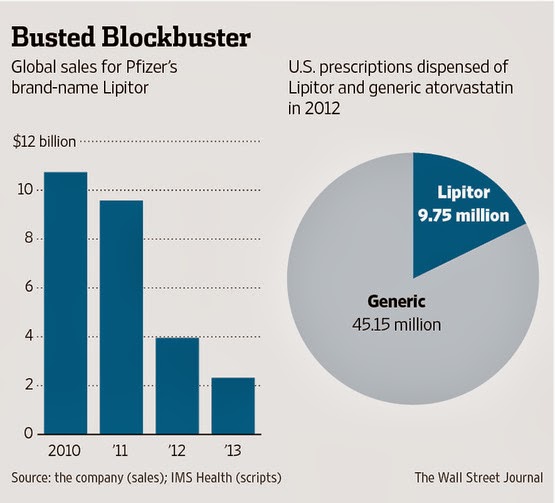 I’ve been following Lipitor’s “demise” ever since Pfizer vowed the drug would maintain a 40% share of the total U.S. atorvastatin market.

In May 2012, we all thought Pfizer Threw In the Lipitor Marketing Towel when the Lipitor co-pay card/PBM discount plan failed to meet its goal of maintaining the aforementioned 40% share of the combined market for Lipitor and its generic equivalents for at least 6 months after generic brands were launched. At that time Lipitor’s U.S. market share was 33%.

The pie chart shows that Lipitor’s share of the total U.S. atorvastatin market is now at 18% ($9.75 bn versus a total of $54.9 bn). This is the result after 2 years of competition with generic versions.

OK. Coupons didn’t work. So Pfizer is preparing to sell an over-the-counter (OTC) version of Lipitor.

According to the WSJ, “Pfizer recently started a 1,200-patient clinical trial to test if consumers taking a nonprescription Lipitor get their own blood tests to see if the medicine is improving their cholesterol and then make the right decisions based on the results.” The FDA has to approve the switch to OTC status.

Keep in mind that FDA already has “rejected proposals by Merck & Co. to sell an OTC version of the statin Mevacor, amid doubts that consumers could correctly choose to take a statin on their own or sufficiently monitor themselves for changes in cholesterol levels and side effects.”

Will consumers “undertreat” their cholesterol because the proposed OTC version of Lipitor will come in a 10 milligram dosage form versus the 40 to 80 milligram Rx dosage forms?

IMHO, it all depends upon the price consumers will have to pay out of pocket — medical insurance doesn’t cover OTC medicines. Most people would think a little bit of cheap OTC Lipitor — a brand with a “personality” that oozes “competence” (as described in “Pharma Brand Personality Traits“) — is better than no treatment at all — and surely better than generics that lack brand “personality.” And because it is OTC, consumers will think it is as safe as aspirin and won’t cause any problems that require monitoring. Pfizer can then market it like aspirin without mentioning any of the potential problems/side effects.

How Risky are Rx Drugs?