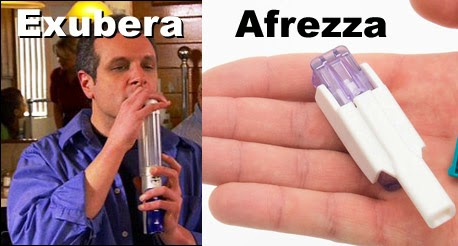 UPDATE (1/5/2016): Sanofi terminated its license agreement related to the development and commercialisation of MannKind’s inhaled insulin therapy Afrezza, MannKind said today (here). MannKind noted that the deal will be terminated no later than six months from the effective date of Sanofi’s notice or July 4. MannKind added that it “is reviewing its strategic options for Afrezza as a result of the termination.”

In the post below I noted the exuberance of the diabetes community for this device and I gave Sanofi kudos for engaging this community via social media. I guess not even the best efforts to mobilize patients via social media in support of a product is guaranteed to be successful.

Also, Sanofi attributed the lower-than-expected sales of Afrezza to the FDA’s requirement that patients undergo lung tests before starting treatment and while using the therapy as well as the broader need to raise awareness about the product (see “Sales of Afrezza Inhaled Insulin Stymied by FDA Says Sanofi“).

Sanofi and MannKind Corporation announced today that Afrezza® (insulin human) Inhalation Powder, the only inhaled insulin, is now available by prescription in U.S. retail pharmacies nationwide. Afrezza is approved by the U.S. Food and Drug Administration to control high blood sugar in adults with type 1 and type 2 diabetes.

Afrezza is a drug–device combination product that consists of a dry formulation of human insulin delivered from a small and portable inhaler to help patients achieve blood sugar control. Afrezza is rapidly absorbed and has a short duration of action. It is administered at the beginning of a meal.

This is a vast improvement over the Exubera “Bong” that Pfizer attempted to launch back in 2007.

In June of that year, Amy Tenderich, author behind award-winning blog Diabetes Mine, wrote:

“Because for any PWD [person with diabetes] with an actual social life, Exubera inhaled insulin is looking like a bomb. As I told the reps at the ADA conference frankly, the science behind it IS revolutionary, and we PWDs are grateful for strides in alternative insulin delivery, of course! But the Exubera Inhaler Device really is as bad as it looks in pictures. Worse, because the bulky ‘white’ plastic portions are not white at all, but that hospital-grade biege that reminds you of walkers and bedpans. An aesthetic nightmare, in the age of cool gadgetry” (see “Are you happy to see me, or is that just your Exubera Bong?”).

The Afrezza device is definitely a cool bit of gadgetry! This may be the first time that a drug/device was designed based on fostering relations with patients via social media, something that Pfizer may have learned too late. How so?

It appears that Sanofi’s relations with the PWD community via social media and in the real world has paid off. I have documented these efforts here on Pharma Marketing Blog (see, for example, Sanofi Launches Diabetapedia: “Google” for Diabetes and Sanofi US to Develop Documentary Featuring Real Patients and Their Stories). Sanofi did such a great job soliciting input from PWD via social media that  the U.S. Diabetes team (Dennis Urbaniak, Joan Mikardos, and Laura Kolodjesji) received the third annual Pharmguy Social Media Pioneer Award (see here).

In a poll, Kolodjeski was praised because “she keeps the patient at the center of all her efforts. She is a great example of how we should go about our business in Pharma.” One respondent described Urbaniak as “the most innovative guy in pharma” and said he “opened new ways of engaging with patients in the diabetes field, with courage and consistency.”

Urbaniak left sanofi and is now Managing Director at Accenture where he can spread his “customer centric approach” to other pharmaceutical companies.

P.S. In response to a comment, let me summarize the “angle” of this post: (1) Sanofi may succeed where Pfizer failed, and (2) the success might be due to Sanofi’s social media & real world connections with PWD to help design this device.