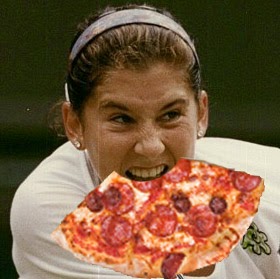 OMG! Is there nothing old athletes won’t do for money?

Remember Monica Seles who was famously stabbed on the tennis court in 1993? No? OK, whatever. She’s celebrity enough to hawk for Shire, which recently won PRIORITY approval from the FDA for a new indication for Vyvanse, it’s ADHD drug:

According to Seles & Shire, which is hosting the website BingeEatingDisorder.com (“A Resource for Understanding B.E.D. in Adults”):

“Binge Eating Disorder (B.E.D.) is not just overeating. It is a real medical condition [my emphasis] that was formally recognized in 2013. B.E.D. is the most common eating disorder among US adults.”

Although Shire’s website has lots of statistics about B.E.D., it does not provide the sources for these statistics. For example, Shire says B.E.D. affects 2.8 million people in the U.S. based on a national survey. But Shire does not say who did the survey or link to the source so we can see if it was based on real science or just marketing hocus-pocus.

Here’s some more undocumented B.E.D. statistics mentioned on the site:

Meanwhile, Seles appears on TV talk shows and People Magazine (here) “opening up” about her binge eating, which she claims goes back to 1993. Why open up now?

“It took a while until I felt comfortable talking about it,” she tells PEOPLE. “That’s one of the reasons I decided to do this campaign: to raise awareness that binge eating is a real medical condition.”

I suppose she got more comfortable after signing a celebrity endorsement contract with Shire. Of course, she does not mention that because the funding is probably channeled through the National Association of Anorexia Nervosa and Associated Disorders and the Binge Eating Disorder Association, two non-profit corporations that likely are also in B.E.D. with Shire.