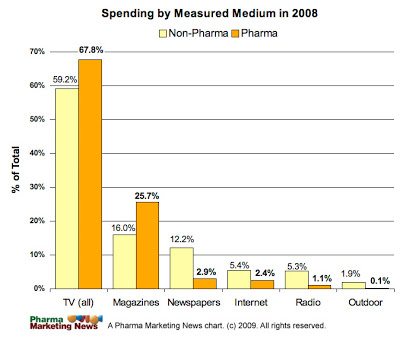 Fourteen (14) pharmaceutical companies made it into AdAge’s 2009 list of Top 100 National Advertisers (based on 2008 ad spending data). They are, in descending order of total ad spending:

The list is based on “measured media” spending across 19 media and includes estimates of “unmeasured media,” which includes direct marketing, product placement, and most notably, paid Internet search, which some analysts estimate is about 40% of the total Internet ad spend of companies in general.

NOTE: P&G, which is primarily a packaged goods company and one of the biggest ad spenders in the US, is not included on this list even though it may market a few pharma products. It was also not included in last year’s analysis (see “Marketing Mix of Leading Pharma Advertisers“).

I plotted the media mix for pharma advertisers vs. non-pharma companies in the list and came up with this (click on the image for a larger view): Internet display ad spending still represents a very small portion of pharma’s measured media spending (2.4% in 2008 vs. 3.1% in 2007). Non-pharma companies allocate twice as much of their budgets to the Internet than do pharma companies.

Two pharma companies — Abbott and AstraZeneca — stand out from the pack in terms of the percent of their budgets allocated to Internet advertising in 2008 (see figure below; click for an enlarged view). 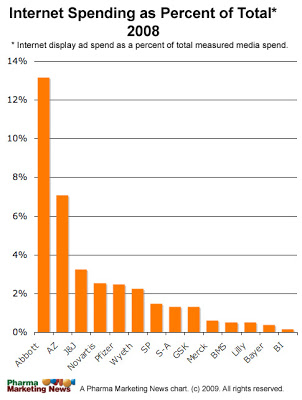