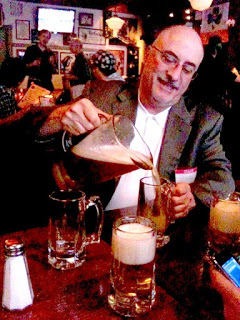 I arrived a wee bit late and could not get a seat at the Twitter stars’ table, which was equipped with a power outlet! I sat way off to the side where I could plug my notebook into a nearby wall socket to recharge my PowerBook’s battery.

Someday, I will get a seat at the table with the big Pharma Twitter guys and gals. At least, however, I attended a Tweetup with a few of them after the meeting at McGillin’s Olde Ale House, Philadelphia’s oldest continuously operating tavern, where I poured Farmhouse Ale for the gang (see photo courtesy of @woodruff‘s new iPhone aided by Photoshop image enhancement).

This particular Tweetup was open to anyone in the Philadelphia area who heard about it through Twitter or wherever one hears about these things (I’m sure there’s an app for that on the iPhone). One of the organizers was Neal Wiser, a digital marketing professional (@nealwiser).

At first, I was a bit wary of going to a Tweetup in an Irish pub, especially one billed as “Olde.” Where I grew up — in NYC — geeks and Irish drinking establishments did not mix!

As us geeks walked down the seamy alleys parallel to and behind Broad Street looking for McGillin’s, I wondered if my first Tweetup would be my last. Luckily, however, McGillin’s and the Tweetup organizers had the foresight to isolate us on the second floor, away from the regular pub patrons!

Most of the attendees were younger than us pharma Tweeters. Surprisingly, there were as many women in attendance as men. It was then that I realized that Tweetups like this were good places where single (or married) men and women could meet for purposes other than sharing Twitter stories! Of course, that was NOT our interest! We appropriately sat at our own table and behaved.

It occurs to me that my colleagues who work for pharmaceutical companies and who use Twitter should attend Tweetups in their area. Better still, they should organize their own Tweetups.

Media relations people want relations with media people — reporters and bloggers. What if, instead of inviting these people to dinner, Marc (and other pharma media relations people) organize their own Tweetups? Most Tweetups are held at restaurants or pubs that have separate rooms or areas that can be set aside for the group. You wouldn’t do this at trendy places, but at places that need and welcome the patronage. Pubs and Taverns are perfect venues, especially for reporters.

One thing that would be a problem is who pays? Each of us at last night’s Tweetup paid for our own food and drinks — a grand total of $13 (including tip) for each of us (you can get a half-pound hamburger and chips at McGillin’s for $4.99)!

Now that Marc has conditioned us bloggers to expect fine food and drink on J&J’s tab, it may be difficult to get us to pay our own tabs at a Tweetup. Even the most destitute blogger, however, can pay his/her own way if we’re talking about a tab under $20. Perhaps door prizes can be used as an incentive to attend.

All I know is that for $13 out of pocket, I had a great time at last night’s Tweetup even though I did not win anything or walk out with a new BFF.