Now that Plan B is approved for sale OTC and by prescription, Barr Pharmaceuticals is faced with the task of marketing it. What’s their marketing “plan A” for Plan B?

A few insights to Barr’s thinking can be found in a recent Wall Street Journal article (“A Subtle Method for Selling Plan B“). 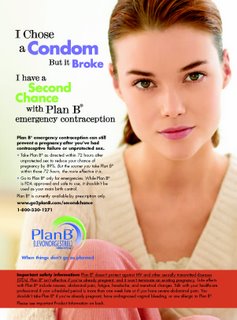 Contrary to the title of the WSJ article, the evidence so far hints at a not-so-subtle approach. For example, the ad shown on the left has run recently in Lucky and Cosmopolitan magazines. It plays upon the fear of “contraceptive failure” — “I Chose a Condom, But it Broke.” Have no fear, Plan B is here!

Of course, we all know that accidents can happen, although I have never experienced a condom breaking.

We could argue if that is an acceptable risk or not. But just like drugs with side effects, I wouldn’t want to be among the two percent that suffers the problem.

But if the same fear campaign tactics were used with other drugs — like statins — we might protest. “I exercised and ate right, but I still got a heart attack. Next time, take Pravachol!” is different than “Along with exercise and diet, Pravachol can help you prevent a heart attack.”

That’s one reason why you won’t see broad-based Plan B TV ads that talk about “contraceptive failure.” “…playing up the sexual factor rather than medical information makes some regulators uncomfortable,” according to the WSJ article. TV is just too visible, politically speaking.

“You won’t see that from us,” says Amy Niemann, Barr’s vice president of proprietary marketing. “We have been and will continue to be committed to responsible marketing with this product.”

So, what will we see?

The most subtle Internet Marketing technique I know of is behavioral targeting (see “Behavioral Targeting: RJ vs JP“).

Behavioral marketing, which categorizes users based on their previous Internet searches and then serves them relevant ads no matter where they are on the Internet, may be just the ticket for Plan B Internet marketing. I have dissed the technique elsewhere (op cit), but think it is a perfect idea for Plan B! No, really! The main advantage to Barr is the stealthiness of behavorial targeting — behavorial-targeted Plan B Internet ads will simply be invisible to Senators and Congressmen!

Here’s how it could work.

Let’s assume the demographic is a female teen between the ages of 14 and 19.

BTW, Barr shouldn’t worry about the 18-year minimum for OTC purchase — I assume, just as with underage boys and beer, underage girls can get the help they need for an OTC purchase of Plan B. Besides, I’ve heard that an old marketing maxim says to direct your ads at a younger target audience than your typical user. This maxim has been applied with a vengence in the erectile drug market (see, for example, “Pushing the Envelope is Bad for DTC“). Of course, Barr will have to keep its marketing strategy very confidential — they may need a bunker like the one in which Pfizer’s Kindler relaxes.

Instead of the old-fashioned approach, where you place ads on Web sites and pages where these girls hang out, why not let Yahoo! develop a targeted category of teenage females based on their recent searches and deliver ads to them whenever they are on the Internet?

You could, for example, categorize users by searches on topics related to music, brands, cosmetic procedures, etc. that are popular with young women — anything that would put them into a “female sexual promiscuity” category. (I know…fiendish, isn’t it?)

“You are no longer targeting people you think will be interested in your product,” said Les Kruger, a senior marketing manager at Cingular. “We know based on your behavior that you are in the market, and we can target you as you bounce around the Internet.” (See “Marketers Trace Paths Users Leave on Internet“.)

Ads run within context on relevant pages may be ignored whereas behaviorally-targeted ads are “less expected and [are] playing to your subconscious,” says Lydia Snape, the director of online marketing at Renegade Marketing, Panasonic’s Internet advertising agency.

So, when there’s a contraceptive emergency, you know right away about Plan B, because you’ve been seeing the ads for some time in a lot of the places you go on the Internet — and not just places that talk about emergency contraception.

While you’re at, pick up a package of Plan B, just in case.

BTW, can guys buy Plan B? Just a thought. What could be cooler than a 19-year old guy showing up to a date with his 17-year old girlfriend with a pack of condoms and Plan B? Unfortunately, the Plan B package probably won’t fit into his wallet!