In an effort to stave off “Looming Brand Extinction,” many drug companies are developing dual action drugs that combine a best-selling drug near patent extinction with another drug. Merck’s Vytorin, which combines the lipid-lowering drugs Zocor with Zetia, is an example (see “Two Sources of Zocor“).

Pfizer is now advertising a new dual action drug called Caduet, which combines into one pill Norvasc (for hypertension) and Lipitor (cholesterol), which is soon to go off patent. The name “Caduet” may be a combination of “Cadiovascular” and “Duet.”

The print and TV ads for Caduet feature a hiking man split into two — one who needs a pill for high blood pressure and another who needs a pill for high cholesterol. In the print ads these two guys are shown side-by-side against a forest backdrop. It resembles one of those old fashioned stereoscopic photos that results in a 3-D image when viewed in a special optical device (see photo above). Unfortunately, the 3-D technique is not used in the Caduet print ad. Too bad! A lot of buzz could have been created if it were.

Caduet is the first combination drug that I know of that treats two different medical conditions. Vytorin’s components treat only one condition — high cholesterol — but through two different pathways.

What Next?
The next step for Pfizer is obvious: Add Viagra to the mix! Now, that’s what I’m talking about!

Here’s my concept of the print ad graphic for “TriVig,” the name I have given to the new combination of Norvasc (for hypertension), Lipitor (for high cholesterol), and Viagra (for erectile dysfunction, aka ED):

Undoubtedly, the two guys on the left and right want to be the guy in the middle. Enough with hiking in the woods! Get some wood at home!

It makes sense to add Viagra to Caduet. After all, the new ED marketing mantra is that hypertension and high cholesterol can lead to ED in men. The new combination would treat the whole man and make the man whole! That could even be the TriVig marketing slogan! 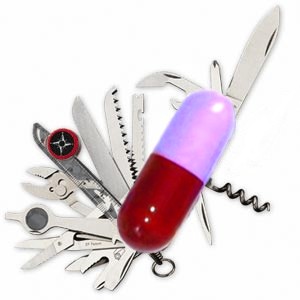 What about diabetes? Isn’t that also a risk factor for ED? What about adding Exubera to produce a four-in-one pill called “QuadraVig?” But it can’t be a pill because Exubera is delivered by inhaler. QuadraVig would have to be a combo drug delivered by inhaler like Exubera. That would be very fast acting! Even faster wood!

Eventually, there will be Swiss Army pills on the market that combine multiple ingredients. It’s not exactly the kind of innovation the industry is touting in its PR, but I can see some advantages.

By combining more than two drugs in a single pill, you can increase the number of unique combinations or brands. Three ingredients (A, B. C), for example, can be combined in 4 unique ways (ABC, AB, AC, BC) to make four new brands. Four ingredients can lead to X different brands! I’ve leave the solution of that math problem to commenters. 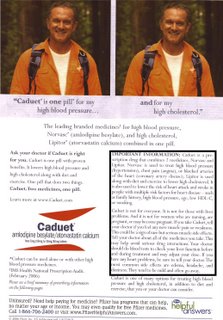 One Problem: More Risk to Communicate
I notice that the Caduet print ad devotes significant space to the “fair balance” statement — about 15% of the ad (see black outline in figure on left). The average for other Rx print ads is about 12%.

More importantly, the “brief summary” — the safety information that usually appears in small print on the back side of print ads — takes 2 full pages! And the type size is miniscule!

The Caduet brief summary is so long because side effects and safety information for EACH component of Caduet — Norvasc and Lipitor — must be included. Imagine if there were a third or fourth component!

The Vytorin print ad, on the other hand, devotes only 6% of the ad space to the fair balance statement and only one page to the brief summary, which is in patient-friendly, large type format — a format that Pfizer pioneered!

Consequently, Caduet represent a step forward in terms of combination therapy, but a step backward it terms of communicating risk in its consumer ads.