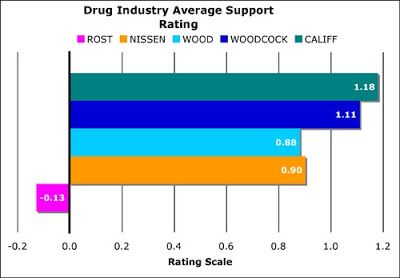 To date, nearly 250 people have responded to my Who Should Obama Nominate for FDA Commissioner? survey. The results so far show Rost, Wood, Nissen, Woodcock, and Califf as the top 5 contenders.

Eighty-six percent (86%) of respondents are from the US and the charts below focus on choices made by these respondents. These are preliminary results — I intend to keep the survey going until someone is nominated. If you haven’t yet voted, I hope you will take a couple of minutes to do it now and include what you think should be at the TOP of the new commissioner’s agenda. 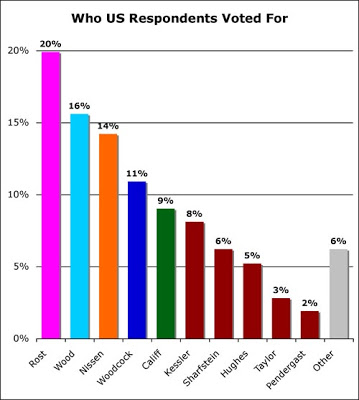 Peter Rost — who has made a reputation as whistle blower, muckraker, and Pfizer nemesis — holds the lead among all US respondents, 31% and 28% of whom are very and somewhat supportive of the pharma industry, respectively. Most of Rost’s US voters are among those who claim to be very or somewhat unsupportive of the industry (see chart below).

“[Peter Rost] knows how Big Pharma operates, isn’t owned by them and probably wouldn’t be bought, either. He is also two cents short of a dollar, which helps.” — Anonymous respondent

Among industry supportive US voters, Susan Wood is the person of choice, but Steve Nissen, M.D., who has often criticized clinical trial data, is the #2 choice among US voters who support the drug industry. 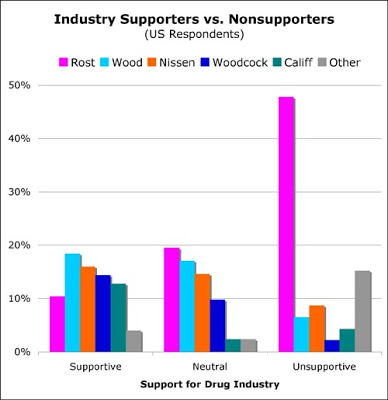 “[Susan Wood is] a true believer in the promise of change. Return the FDA to science based leadership.” — Anonymous

“[Steve Nissen] is a doctor, he’s not scared to stand up to pharma, he’s intelligent, and the new commish should clean house of the ‘insiders’ who have gotten too cozy to big pharma.” — Robert Lands, Engineer, Union Pacific Railroad. Robert says he “somewhat supportive” of the pharma industry.

Some comments about other contenders include:

“I think [Dora Hughes] will offer a balance between business and science that will ring true.” — Norma-Jeanne Hennis, President, MedPharm Communications

“[David Kessler is] Someone who is familiar with industry and how it works but who will call the executives on the carpet when they knowingly are pushing medicines for dollars not patient quality of life.” — Juanita Hawkins, President, Juanita Hawkins Consulting LLC

“[FDA] needs [Janet Woodcock who has a] … deep history and knowledge of FDA.” — Anonymous