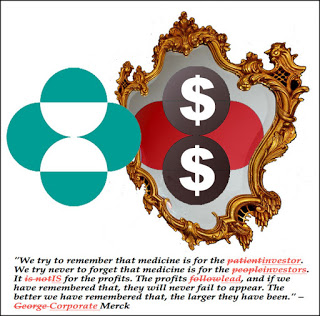 “How can Merck look itself in the mirror?”, asks Josh Bloom of the American Council for Science and Health (see here).

“This week, Merck, with some questionable help from the FDA, gave more ammunition to industry critics, who typically maintain that the industry contributes little innovation, and is simply concerned with profits,” said Bloom.

“For the most part, this criticism is biased and uninformed, but this time I’m siding with the critics. Because Merck is trying something that is as good an example of marketing without innovation as you’ll ever see.”

Derek Lowe, respected author of In the Pipeline blog, agrees. “I can’t see how he’s wrong,” said Lowe (here). “What I’m seeing is an attempt by Merck to position itself should the ongoing Vytorin trial actually exonerate the combination idea. Vytorin, you see, doesn’t have all that much patent lifetime left; its problems since 2008 have eaten the most profitable years right out of its cycle. So if Vytorin turns out to actually work out, after all the exciting plot twists, Merck will be there to tell people that they shouldn’t take it. No, they should take exciting new Liptruzet instead. It’s newer.”

“If anyone can think of a reason why this doesn’t make Merck look like shady marketeers, I’d like to hear it. And (as Bloom points out) it doesn’t make the FDA look all that great, either, since I’m sure that Liptruzet will count towards the end-of-the-year press release about all the innovative new drugs that the agency has approved. Not this time.”

Merck rewrites its founder’s words: “We try to remember that medicine is for the patient investor. We try never to forget that medicine is for the people investors. It is not IS for the profits. The profits follow lead, and if we have remembered that, they will never fail to appear. The better we have remembered that, the larger they have been.” – George Corporate Merck

In another news story regarding Merck this week, John LaMattina, Contributor at Forbes blog, laments that even Merck’s “Good Deeds Are Criticized.” LaMattina’s outrage concerned criticism of Merck’s (and GSK’s) announced HPV vaccination program for cervical cancer in Rwanda.

LaMattina points out that “Pharma isn’t working in a vacuum.” Indeed! You can also say that good news about pharma companies (like donations of drugs) do not appear in a vacuum. Sometimes, as in this case, the good news must be weighed in context of the bad news. It’s probably true that the bad news stinks for a long time, whereas the good news dissipates, especially when every direct-to-consumer (DTC) ad for Merck’s new anti-cholesterol drug reminds people of the “bad” side of pharma, which puts profits — not patients — first!