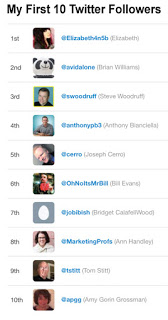 Twitter is Ten Years Old Today! I started posting on Twitter 2 years later on Mar 21, 2008. Since then I have posted over 24,000 tweets (access and search the archive here) and have just reached the 25,000 follower milestone!

Who are they and what are they doing now?

Aside from Elizabeth, all of the people on the list are marketers and are involved in the health industry and all still follow me. You can track them down and see what they are up. I might interview a few of them later.

I just want to say Thanks to my loyal Twitter followers and happy anniversary to me and Twitter!

The alli lesson: Pharma marketing is not ready for transparency