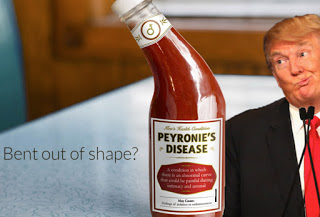 With all the GOP presidential candidate focus on the size of Donald Trump’s penis, I thought a peyronie’s disease [bent, small penis] DTC ad paid for by Endo Pharmaceuticals was applicable to the Donald.

It’s a reasonable assumption, because the company claims that one in ten men worldwide may have the condition.

I came across the ad in a MedCity post, which I modified below. You can find the original here: “Endo Pharmaceuticals’ ads bring awareness to penile curvature“).

Peyronie’s disease is a “prevalent” but under-diagnosed – and misunderstood – condition that causes curvature of the penis when a man is aroused [like when Trump gives a victory speech].

Endo Pharmaceuticals is trying to straighten things out a bit – bringing awareness to the disease with a new ad campaign. It portrays bent beer and ketchup bottles to help represent similarly contorted equipment – showcasing Peyronie’s as an everyman’s [including, perhaps, Trump’s] disease.

And this “Ask About the Curve” awareness campaign is a clear means for Endo to broaden the market for its Peyronie’s disease drug, Xiaflex. Ads for the drug have similar messaging.

The campaign claims that 1 in 10 men [including, perhaps, Trump] globally could have the condition. While literature places the incidence rate around 1 to 3 percent of men, researchers estimate many more men have the disease, but many men are reticent to report their condition to a urologist [or, like, Trump, they claim they have no problem in that area].

Some 54 percent of men with Peyronie’s disease report relationship problems, the ads say [obviously, Trump is among the 46% who have “very, very good” relationships with women, except perhaps with Rosie O’Donnell and Megyn Kelly]. Much like erectile dysfunction, this is a prevalent men’s problem – but unlike ED, which has been somewhat destigmatized thanks to decades of awareness campaigns, PD remains a fairly misunderstood disease.

Xiaflex, which is also used to treat severely clenched fingers [Ah! The missing link between Trump’s hands and penis!], is the only approved treatment for Peyronie’s disease. Given the high incidence of the condition, such awareness campaigns are an extremely savvy way to break into this largely untapped market.