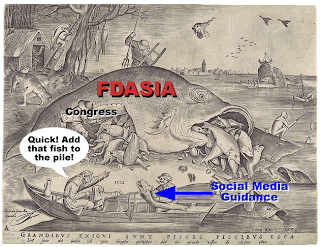 A month ago, I wrote an “open letter” to Megan Clark Velez, MPH, Office of the FDA Commissioner, asking her for more transparency regarding “actions completed” towards issuing social media guidance  on or before July 9. 2014, in compliance with the FDA Safety and Innovation Act (FDASIA). In my letter, which I also sent via snail mail, I referred to this date as the “Social Media Guidance Cliff” (see FDA’s “Social Media Guidance Cliff”: An Open Letter to Megan Clark Velez).

I have not heard back from Ms. Velez in response to my letter.

As of today, the FDASIA-TRACK database/website, which is supposed to notify us of “Actions Completed” toward complying with FDASIA, the entry for social media guidance shows NO ACTION:

Some ad agency people are still hoping for action on this front BEFORE FDA reaches the “Social Media Guidance Cliff” (see this Pharmalot Op-Ed piece). For example, Brian Reid, author of the Op-Ed piece, suggests that like the guidance for responding to unsolicited requests for off-label information (see here), FDA will include tidbits of social media guidance hidden away in OTHER guidance documents. “The first possibility is that the FDA develops a giant, comprehensive guidance document that drops sometime before the deadline, capturing the agency’s thinking on everything from online video to how you shoehorn risk information into a tweet,” said Reid.

But, in light of recent court cases putting FDA in a defensive position regarding its off-label “rules” (see here), the off-label guidance FDA recently issued must be considered an outlier meant to shore up its defense (also, that guidance was not even included in FDA’s 2012 “Guidance Agenda”). That is, you cannot assume the off-label guidance is a harbinger of how FDA will address social media in the future.

Just like Congress is dealing with the “fiscal cliff,” I predict FDA will go down to the “social media guidance cliff” wire, with no solution in sight in 2013.

Although FDA Commissioner, Dr. Margaret A. Hamburg, launched FDA’s Transparency Initiative in June 2009, the agency hasn’t been very transparent regarding social media guidance. While FDA representatives go to industry conferences and say things like issuing social media guidance is a “high priority,” they do not commit to any specific dates. The 2013 “Guidance Agenda,” for example, is nowhere to be found and, as noted above, FDASIA-TRACK does not list one single “action” completed that moves FDA forward in issuing this guidance.

For those experts — like Mr. Reid — who believe FDA may face the wrath of Congress if they do not meet the FDASIA deadline of July 9, 2014, I can only say you must be kidding! Congress has much bigger fish to fry with FDA (like compounding pharmacies). Perhaps, however, social media may be mentioned (in passing) as part of a “comprehensive” Congress-FDA “fish fry.”

Viva Viagra Ad is No Cure for Morte Sales