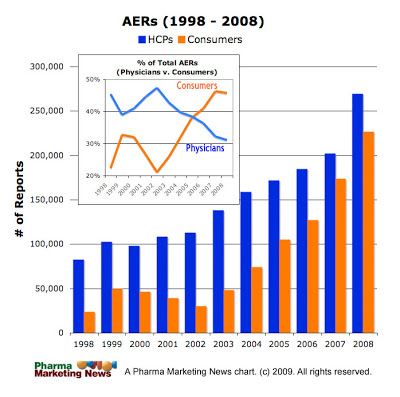 The definition of “adverse event” for both nonprescription drugs and dietary supplements is “any health-related event associated with the use of a [nonprescription or dietary supplement] that is adverse” (see source). This could include any unfavorable and unintended sign including an abnormal laboratory finding, symptom or disease, and, more seriously, death.

Click on image for an enlarged view.
“These data,” says FDA, “describe information about the reporter – the person who submitted the report to FDA, or the person who submitted the report to the manufacturer (who then sent the report to FDA). Physicians and pharmacists are the healthcare providers (HCP) who submit reports to FDA most frequently. Other Healthcare Providers include nurses, dentists and others. Consumer refers to any reporter who is not documented in the report as a healthcare provider. This figure includes only data where reporter information is known, and some adverse event reports may contain more than one reporter.”

Why did the number of AERs increase so dramatically in 2008?

“Other Healthcare Professionals” may be partly responsible for the increase. AERs submitted by this group increased by 47% in 2008 v. 2007 (data not shown but available here). This compares to a 27% to 33% increase in AERs received from other reporters.

The FDA’s use of technology to reach out to the public (see “FDA’s Use of Social Media”; PMN Reprint#83-03) may also have made it easier to submit adverse event reports.

Whatever the cause, the drug industry is concerned and often cites AERs as a major reason why it has not engaged in social media as aggressively as it could.

But adverse event reporting requirements are just the tip of the iceberg that is the barrier to pharmaceutical use of social media for healthcare marketing and communications. For more on that and some ideas for overcoming this barrier, listen to this ePharma Pioneer Club roundtable discussion (podcast).