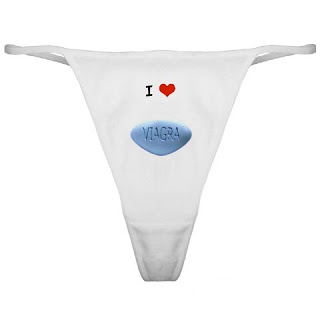 “[Pfizer] has initiated an internal investigation following the dispatch to GPs of pairs of boxer shorts, bearing a Pfizer logo to mark the tenth anniversary of the erectile dysfunction medication Viagra in Ireland,” reports IrishTimes.com (‘Viagra boxers’ to GPs cause quite a stir).

“One GP who received the boxers said he ‘hadn’t had such a good laugh at a time when there weren’t many opportunities to do so’, while another said she had no intention of returning the item and only regretted that a Viagra-equivalent for women wasn’t on the market.”

I searched and searched Google to see if I could find an image of these boxers online, but was unsuccessful.

I did find, however, a site that sells T-shirts, boxers, and thongs emblazoned with “I (heart) Viagra.”

The image on the left is my interpretation of how a Viagra-logoed thong might look.

Here’s the catalog description of the actual I (heart) Viagra thong:

“Panty-minimalists love our casual thong that covers sweet spots without covering your assets; putting an end to panty-lines. This under-goodie is ‘outta sight’ in low-rise pants. Toss these message panties onstage at your favorite rock star or share a surprise message with someone special … later.”

“Surprise message” indeed! I’m not sure how a man might receive that message coming from his partner just before sex.

Although Pfizer claimed “This should not have occurred and only did so through the poor judgment of a Pfizer employee,” it did not explain why Pfizer would create boxers embossed with the Viagra logo and who the intended audience was if not physicians.

The boxers may have been part of Pfizer’s left-over “tchotchke” inventory that the company distributed to its employees rather than shred for scrap (distribution of tchotchkes — free gifts — to physicians is now forbidden by PhRMA’s guidelines; also forbidden in Europe).