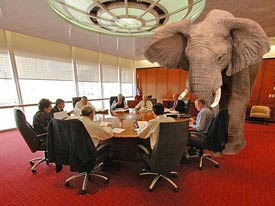 According to a press release issued today, the Pharmaceutical Research and Manufacturers of America (PhRMA) Board of Directors has adopted measures to strengthen the PhRMA Guiding Principles on Direct to Consumer Advertisements about Prescription Medicines.

What’s missing is any mention of a moratorium on DTC advertising for new drugs.

At the recent “DTC in the Era of Consumer Choice” conference hosted by DTC Perspectives magazine, Hugh O’Neil, VP and Head of Market Access at Sanofi-Aventis, stated that PhRMA’s members are likely to agree on a DTC advertising moratorium for newly approved drugs (see “An Experiment: Ban All DTC Broadcast Advertising for One Year“). O’Neil said there was a debate about the exact length of the moratorium — whether it should be 6 months, one year, or longer. Most experts in attendance expected PhRMA to recommend a 1-year moratorium.

So much for insider expert opinion!

I guess PhRMA did not want to open a crack in which Henry Waxman could insert a crowbar. According to the WSJ Health Blog, Waxman “voiced support for legislation that would give FDA the power to ban direct-to-consumer advertising for some drugs during their first two years on the market.”

Can Obesity Be Treated with Cheap Antibiotics?