You may be seeing a lot more Levitra and Cialis ads on TV these days than you do Viagra ads. That may be due to some free market research data that Pfizer got access to thanks to its trademark infringement case against Ayre Sachs, the retired Israeli army sergeant who parked his “erectile projectile” Viva Viagra missile in front of Pfizer’s Manhattan headquarters (for background see “Warning to Buzz Marketers: ‘Pfizer did not get the joke’“). Keep reading for the explanation.

As mentioned in a previous post (see “Viva Viagra Missile Guy Vows to Continue His Quixotic Fight Against Pfizer“), Mr. Sachs surveyed 400 people as evidence that the Viagra trademarks are not entitled to trademark protection because they have become so famous that they are now generic.

Sachs sent me data from his survey in a personal communication (see the chart below; stroke it with your mouse for an engorged view).

I won’t comment on Sach’s contention that this proves his point about the Viagra brand being so common it is generic. More relevant to me is that it proves that Cialis and Levitra advertising agencies need to work overtime to capture the share of mind that Viagra has among the public. Well, at least the public that Sachs surveyed, which consisted of “Gays, Lesbians, vegetarians and war opposing residents” in the neighborhood of Union Square, NYC.

“On 12/9/08 a missile with an ED drug name was driven through Manhattan and parked for a survey at the center of Union Square (see images) an area known for high concentration of Gays, Lesbians, vegetarians and war opposing residents,” said Sachs in his communication to me. “Out of about 100 people polled on location with a missile detached from the truck and fully erected in the middle of the street only 4 have stated they hate it to the point they will switch to another drug and two of the four where female.”

Sachs also sent me this photo taken in Union Square to prove his point. I imagine it was included in the communication he sent to Pfizer that was cited in the court papers: 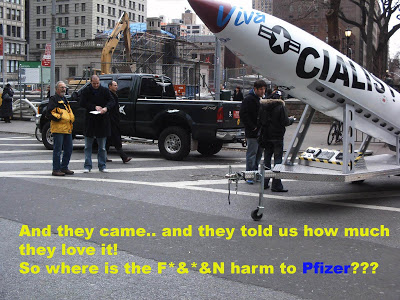 I don’t know, but maybe Pfizer was pissed that Sachs displayed a “Viva Cilais” missile instead of the “Viva Viagra” missile he used in front of Pfizer’s headquarters.

Ayre sent me this comment/correction:

Please correct the following on your site: “Well, at least the public that Sachs surveyed, which consisted of “Gays, Lesbians, vegetarians and war opposing residents” in the neighborhood of Union Square, NYC.”

This comment is true but is related for survey VR-4 which goes to show that even “Gays, Lesbians, vegetarians and war opposing residents” in the neighborhood of Union Square, NYC. who naturally will oppose such advertising platform – agreed nine out of ten that it is a fun idea (and that is why I brought the actual missile for them to view). The 413 people I sent you info about are the ones that where pulled with the questioner VR-1 around the city which makes your point about cialis and levitra even stronger.