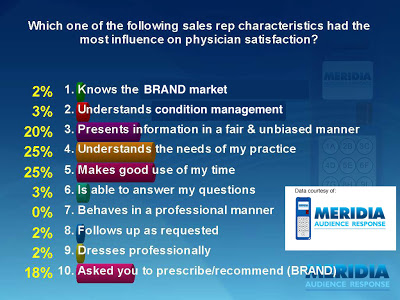 The ABC of sales, according to Alec Baldwin in the movie Glengarry Glen Ross, is “Always Be Closing.” Baldwin’s character — Blake — is from “downtown” (ie, headquarters) and he won’t hear about “weak leads” as an excuse for not selling real estate in Florida to retire folk. See the scene in the YouTube clip at the end of this post (WARNING: Explicit language!).

Tuesday, I attended eyeforpharma’s Sales Force Effectiveness USA 2009 conference in Princeton, NJ and I heard about some evidence that closing skills may not be that important for pharmaceutical sales reps who “sell” to doctors that are definitely not retired!

Two presentations at this conference impressed me: one about “Getting Control of Email” (see Pharma Sales Rep “Hamsters” Waste Time on Email Treadmill) and the other entitled “The Race for Doctors’ Minds. Factors that Drive Sales Rep Success.” I’ll focus on the latter in this post. The presenter, whose name I won’t mention here without his permission (I call him MR Guy), was a market research manager at a subsidiary of a major healthcare/pharmaceutical company.

MR Guy presented some results from his doctoral thesis, which tried to determine what was the ideal balance between “soft skills” and “hard skills” that sales reps should have in order to be successful.

Soft skills were what MR Guy called Emotional Intelligence (EI), which included things like listening skills and dressing and behaving in a professional manner. Hard skills (or Consultative Selling Skills, aka CSS) include knowledge of the product, the medical condition it treats and, of course, closing skill.

[I won’t go into the methodology of MR Guy’s research here. I hope to cover this in more detail in a future article for Pharma Marketing News.]

Before presenting the findings of his PhD thesis, MR Guy polled the audience of about 75-100 and asked them which from a list of sales rep characteristics had the most influence on physician satisfaction. The results are shown in the chart (supplied by Meridia Audience Response) below (click on it for an enlarged view). The product brand name and specific medical condition are de-identified in the chart reproduced here.

While closing (poll choice “Asked you to prescribe/recommend (BRAND)”) was not the audience’s top choice, it was #4 out of 10 and far more popular than many of the “soft skill” characteristics such as “Follows up as requested,” for example.

In contrast, MR Guy’s thesis top 4 results were as follows:

Closing was not among the top five choices in MR Guy’s research.

Note on Closed-Loop Marketing
“Follows up as requested” was the #5 choice.

This is a good argument for implementing a “closed loop” sales effectiveness/marketing solution. However, that does not mean trying to implement a technical solution such as using a touch screen computer to present sales aids and seeing which route the physician takes through the screens.

The best closed-loop marketing technique, according to MR Guy, “may be a simple follow-up call.” The rep can use sticky notes as reminders or a program on her notebook computer — whatever system she/he is comfortable with.

At lunch, I heard some criticism of technology-driven closed loop marketing: implementation is a bitch! My lunch mates suggested it may take up to 5 years to fully implement such a system, by which time technology will have advanced so much as to make the solution out of date. For an idea that may be easier to implement and will never go out of date, see “Closed-Loop Marketing: A New Role for eDetailing”; PMN Reprint #73-04).

Back to the study and closing…

MR Guy also studied what sales rep characteristics were most important for getting the physician to prescribe the product being promoted. All other things (both EI and CSS skills) being equal, if one rep asked for the business (closed) and one rep did not, would the “closer” be more successful in selling the physician?

The majority of the audience response (68%) chose the closer, whereas MR Guy’s thesis study said it made no difference whether the rep closed or did not close.

MR Guy pointed out, however, that you cannot conclude from this study that closing is not impactful. He did not measure, for example, the “quality” of the closing. A member of the audience suggested that a good sales rep could subtly be “closing” all throughout the sales call. I guess that person took Mr. Blake’s point of view: Always Be Closing!

P.S. Coincidentally, someone called me yesterday to ask me some questions about pharmaceutical sales jobs. She had sales experience in another industry and was going on a interview for a pharma job today. She was worried if pharma sales reps were under a lot of pressure to make quotas. She just couldn’t take that kind of stress. I didn’t ask her if she had brass balls, which Blake in the above video clip assured his salesmen were necessary to close the deal.