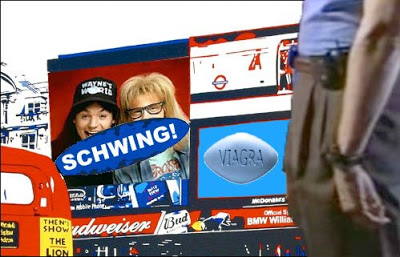 The next big thing, according to some of my Twitter pals, is interactive billboard ads such as this one for McDonald’s:

You get the idea…stand across the circle (ie, circus) and strike up an appropriate pose making sure your head is correctly aligned with the action in the ad. Voila! you’ve got a nice souvenir shot to send home! Uh, I mean post on your FaceBook page.

Now imagine if the UK allowed direct-to-consumer (DTC) advertising of Rx drugs and Pfizer created the first interactive billboard ad for Viagra! Here’s my vision of how it might look with someone posing in front — I can’t show you the animated version. Just imagine the Viagra pill growing larger and larger until it reaches the size shown.

I added a little more innovation by including a celebrity endorsement of a sort in an adjoining ad space.

@AZHelps: Is This a Good Model for Pharma Use of Social...