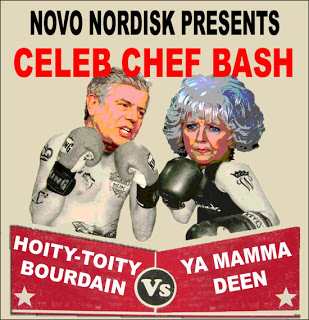 Yesterday, I spoke with Ambre Morley, Associate Director, Product Communications, Novo Nordisk, who answered my questions about why her company teamed up with celebrity chef Paula Deen as a spokesperson for type 2 diabetes treatment (listen to podcast of the interview here). In case you don’t have time to listen to the whole interview, here are my takeaways regarding why Novo Nordisk chose Deen.

I asked: “Why did Novo Nordisk decide to work with Paula Deen as a spokesperson? Did she or her agents approach you?”

Morley claimed that Novo Nordisk was looking for a celebrity chef they could hire to develop diabetes-friendly menus for people with type 2 diabetes. As one commenter said on the Diabetes Mine Blog: “Surely the drug companies could choose spokesmen who are role models for their community.”

Why, for example, did Novo Nordisk choose Paula Deen, noted for her fatty, calorie-rich recipes, versus Mario Batali or Anthony Bourdain, both of whom are celebrity chefs with shows on TV (although not necessarily better “role models”)?

“We wanted to take really good recipes and change them — have them certified by dietitians. That’s how it started. We then started to look for chefs that could help us promote this campaign. Honestly, Paula Deen popped into my head,” said Morley. “How cool would it be,” said Morley, “to challenge Paula to change some of her famously tasty, and butter-rich, and really unhealthy recipes?” Probably not much of a challenge if you throw her sons — Bobbly and Jamie — into the deal. The sons have broken with their mama and have their own Food Channel show titled “Not My Mamma’s Meals.” Paula tries to promote her sons every chance she gets. On the Today Show, for example, she tried to do it at the end of the interview but Al Roker cut her off (see it here). No biggie! Her sons are part of the deal with Novo Nordisk.

So, Morley et al called Deen; Deen did not call Novo Nordisk. Morley said that she had “no idea” that Deen had diabetes (she has people who can validate this story, she said), which I suppose is possible considering how secretive Deen was for three years about her condition while all the time promoting her “unhealthy” recipes.

Chef Anthony Bourdain, who has never been a fan of Ms. Deen‘s, told Eater.com: “When your signature dish is hamburger in between a doughnut, and you’ve been cheerfully selling this stuff knowing all along that you’ve got Type 2 diabetes … it’s in bad taste, if nothing else” (see here).

Aside from getting a package deal with Deen and her sons, why else did Novo Nordisk choose her as a spokesperson?

Morley did not want to choose a chef based in food-snobby New York or Los Angeles, which are the haunts of Bourdain and Batali. “I can’t say that a chef in New York — even a chef with diabetes — who has a hoity-toity fancy restaurant would have the same impact on people as Paula Deen would. It came down to: Who would the greatest number of people look at and say that person was like me?”

Regarding the incidence of type 2 diabetes, Morley went on to say that “there’s a huge difference between New York and LA and the rest of the country.” Reality in the northeastern part of the country is different than in the South, for example. “In the Southeast and in Middle America,” said Morley, “when people are diagnosed with diabetes, they don’t run out and shout and tell the world that they have it,” said Morley. True that! But most people down South also are not TV celebrities and role models for millions of people. I have to agree with Bourdain. Deen exhibited “bad taste” (I would say “deception”) by keeping her diabetes secret while hawking “unhealthy” recipes to millions.

Morley claims that a lot of criticism of Deen is unfounded and she implied that the criticism demonstrated a NY-LA bias and that other celebrities would not be subject to the same kind of personal attacks endured by Deen. I would have to disagree, because I for one have often criticized the use of celebrities by pharmaceutical companies. See, for example, my posts about Phil Mickelson (eg, “Amgen Blows Its Marketing Budget on Phil Mickelson Campaign“).