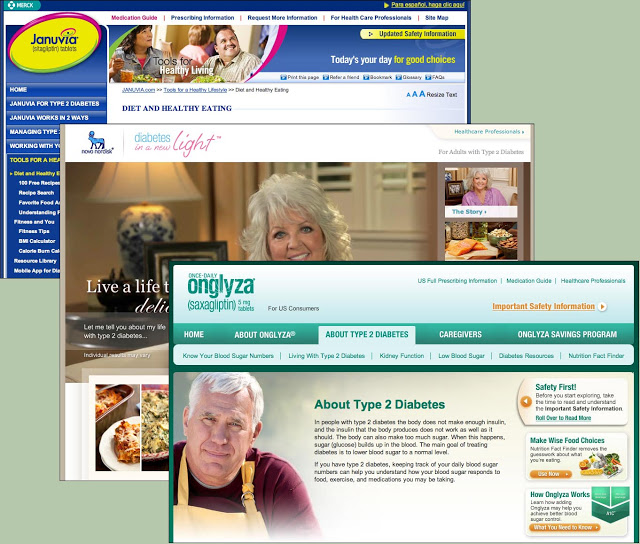 Whose recipes will reign supreme?!

My Twitter friend, @serious_skeptic, who has Type 1 diabetes, just tweeted: “why the hell would anyone want a recipe from a DRUG company anyway???” during a conversation we were having about celebrity chef Paula Deen and her new relationship with Novo Nordisk (read this for the background).

From reading comments made by other people with diabetes on influential blogs such as DiabetesMine, I get the impression that most do not think Paula Deen was a smart choice as a pharma-paid diabetes treatment spokesperson. Of course, most of these people may come from the “hoity-toity” northeast and LA region of the country that is, according to Novo Mordisk, not representative of the majority.

“and what is this b.s. NYC/LA bias to which Novo refers? I don’t live in either & Deen still disgusts me,” says @serious_skeptic.

Getting back to the original question about drug company recipes… Novo’s deal with Deen propels the company into crowded territory. At least two or three other major pharmaceutical companies tout “diabetes-friendly” recipes, including Merck, which markets Januvia, and Bristol-Myers Squibb/Astrazeneca, which together market Onglyza. With Novo (which markets Victoza), those were the top three Google search results on “diabetes certified recipe” (at least the top 3 PAID results; it’s hard to tell these days what are paid and unpaid search results when using Google!):

What these drugs have in common is that they treat type 2 diabetes, NOT type 1. Instead of competing on the effectiveness of their treatments, these companies are competing based on which one offers the best diets. Novo just trumped the competition on that score by signing on a celebrity chef, which none of the others has done at this point.

The emphasis that these drug companies place on DIET rather than efficacy indicates to me that without the diet, these drugs simply would not work very well or work equally well.