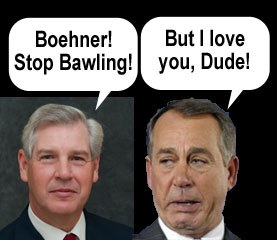 Last night, John Castellani, president and CEO of PhRMA — arguably the single largest Washington lobbyist (aka “advocacy group”) — was the recipient of the 2011 Bryce Harlow Business-Government Relations Award, which is given to individuals who have made “significant contributions” to the advocacy profession.

John also had the “thrill” of meeting one of those politicians PhRMA has undoubtedly helped fund over the years. According to this obsequious post on PhRMA’s blog, “John … had the added thrill of being introduced by House Speaker Boehner. Many in attendance were touched by this gesture of professional respect and friendship on the part of the Speaker.”

Yeah, I bet they are friends! Did Boehner bawl or just kiss John? Whatever. I’m sure PhRMA is happy with Boehner’s efforts to derail health care reform — especially the part that tries to close the donut hole in Medicare!