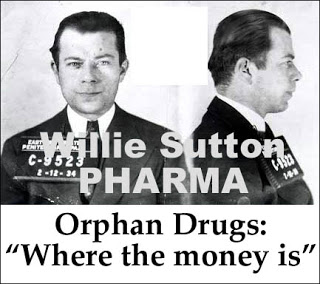 Today, however, orphan drugs also have the potential to turn into blockbusters; ie, be where pharma’s money is at (see “Analyst says smart money is on drugs for certain orphan diseases” and “New Big Pharma Economies of Scale: Less Patients Needed to Reach Blockbuster Sales“).

The U.S. government has been very kind to pharma companies that develop orphan drugs. Under the 1983 Orphan Drug Act of January 1983, orphan drugs get extended marketing exclusivity, tax breaks, expedited approval by FDA, and require fewer patients in clinical trials.

Now, the U.S. is poised to get even friendlier!

“Recently, a bipartisan group of House members proposed to broaden exemptions for drug makers that pay a fee on sales made to government health insurance programs. And those fees, which are due by Sept. 30, could generate at least $2.3 billion this year, according to Bloomberg News.”

This is not exactly what president Obama meant when he said small businesses need incentives to innovate. This is what he meant by big lobbying groups – eg, PhRMA – having too much influence over Congress!