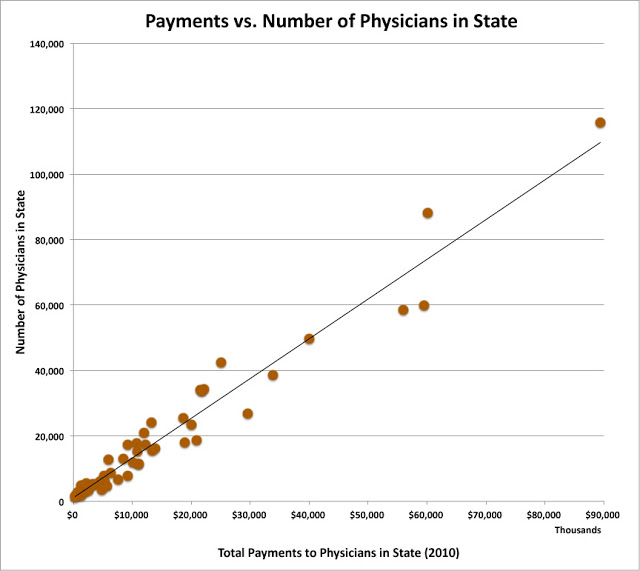 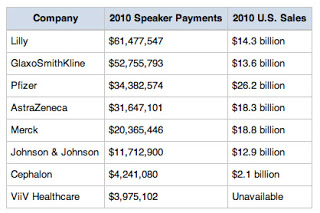 The database contains information about payments made to about 500,000 doctors. That’s about half of ALL doctors in the US (including Peurto Rico). That works out to about $1,520 per doctor (or about $760 per EVERY doctor in the US), on average.

According to the ProPublica database, Pfizer paid my doctor — Catherine Spratt-Turner — $388 for meals and $1,500 for speaking in 2010. This worries me because she wants me to come in and discuss my high cholesterol. Apparently, generic pravastatin is not doing the job and I suspect she wants to switch me to another anti-cholesterol medication. Will she suggest Pfizer’s LIPITOR? I’ll let you know when I see her. Previously, she was hot to get me on AstraZeneca’s CRESTOR, which I resisted because of its published side effects. BTW, Spratt-Turner did NOT get any money from AZ last year.

This is exactly what worries some physicians who receive payments from pharmaceutical companies. As more and more searchable data becomes easily available to the public, they fear that patients will rebel and resist their advice if it appears that payments are influencing that advice. Oh, well! Welcome to the social media age!

The table above shows physician payments made by some pharma companies compared to sales. Surprisingly, Lilly spent about 2 times as much as did Pfizer despite having only about half Pfizer’s sales volume. Perhaps Pfizer is more efficient than Lilly in targeting influential physicians? Nah! Viagra sales don’t need much physician goosing to prescribe, whereas Lilly’s Cialis needs as much help as money can buy. [I suspect, however, from the fees paid to pain docs like Dr Sacks, that Lilly is more concerned with promoting Cymbalta for pain.]

Overall, it appears that pharma companies tend to spread payments among physicians such that there is a more or less direct correlation between the number of physicians in a state and the amount of payments made to physicians in that state (see chart below).

Of course, $760 (or $1,520) per every physician is not going to improve a physician’s lifestyle very much (although I am sure YOU and I would be happy to have an extra thou to spend every year!).

No, this money is central to what I call pharma’s “prescribing recovery act” designed to grease the drug prescribing economy.

Questions I Intend to Ask DDMAC Director Thomas Abrams at the...