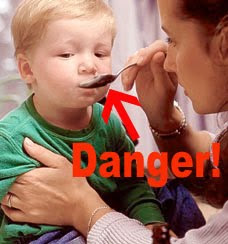 Recently, the news media and Congress focused our attention on the recall of contaminated over-the-counter (OTC) children’s medication manufactured by McNeil Consumer, a division of Johnson & Johnson (see “Despite Its Social Media Expertise, J&J Fails to Use It Effectively to Communicate to Consumers“).

But there’s an even more dangerous problem than contamination relating to OTC medication for children: incorrect dosing.

“There is an urgent need to review the use of children’s over-the-counter medicines by parents,” said Dr Rebekah Moles, University of Sydney, as part of her research, which concluded that many parents are incapable of giving their children the correct dose of liquid medicines.

The Australian study, presented in Lisbon, tested 97 adults and found 61% measured the wrong dose – 17% measured an overdose and 44% did not give enough (see “Many parents are incapable of giving their children correct dose of liquid medicine“).

As reported by BBC: “Dr Moles said that almost half of the 119,000 calls received by the New South Wales Poisons Information Centre, which handles emergency calls from across Australia, concerned accidental overdose in children, with 15% needing hospitalisation.”

I covered this topic last year when I interviewed the principals of a company that invented a solution for the problem of incorrect dosing of children’s OTC medicine. Listen to this Pharma Marketing Talk podcast: “A Solution to the Problem of Inaccurate Dosing of OTC Pediatric Medicines.”

What’s Up with the Veramyst “Brief Summary” Print Ad?