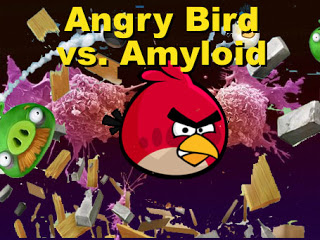 “In the wake of another negative trial with the anti-amyloid biologic drug bapineuzumab, Pfizer and Janssen said they were halting development of the product for mild to moderate Alzheimer’s disease,” reports medpage today (here).

Pfizer may have had high hopes for this drug because it already launched a multichannel marketing/PR campaign centered around “getting old” (see “Pfizer’s Social Media Initiatives are Getting Old“) and this drug in particular (see “Can Pharma Cure Alzheimer’s Disease? A Pfizer Pre-Launch Multichannel Marketing Case Study“).

I’m not sure what other Alzheimer products Pfizer is currently working on, but maybe it’s time for it think out of the box. Perhaps it should look into gamification as an alternative strategy.

You might ask, “Are you serious John? Just yesterday you pooh-poohed gamification as an alternative to ADHD drugs” (see “Cure by Gamification: Science or Wishful Thinking?“).

True that. I still believe that games will never be approved by the FDA for treatment of a medical condition and doctors won’t prescribe them even if they were approved. But that doesn’t mean games cannot be effective in the treatment of Alzheimers Disease by slowing its progression, which has been the goal of clinical trials of drugs like bapineuzumab.

There is actually some SCIENCE published in a peer-reviewed medical journal (JAMA’s Archives of Neurology) that purports to have found a link between “brain-stimulating activities” and levels of protein — ie, β-amyloid — thought to cause Alzheimer’s disease (see “Brain Games May Help Thwart Alzheimer’s: Study“). The authors of the study state:

“We report a direct association between cognitive activity and [11C]PiB uptake, suggesting that lifestyle factors found in individuals with high cognitive engagement may prevent or slow deposition of β-amyloid, perhaps influencing the onset and progression of AD.”

At least one patient support group supports the idea that games might be helpful in thwarting Alzheimer’s Disease (see this LivingStrong web site page: “BRAIN GAMES FOR ALZHEIMER’S“).

For anecdotal evidence, I have been solving 2-3 crossword puzzles per day (as recommended by LivingStrong) for a couple of years and am happy to say that I have not been diagnosed with Alzheimer’s — yet. Unfortunately, I did not have a brain scan before starting nor do I have a control group so as to scientifically prove or disprove that I am not slowly developing the disease.

Nevertheless, I still think it’s unlikely that any drug company would get into the business of “drug gamification” — ie, developing games approved by the FDA for treatment of medical conditions. For one thing, it’s much more expensive getting games approved by the FDA than it is to develop the games themselves — an economic reversal of the typical pharma drug development model.

As a consequence, it would be very easy for competitors to develop therapeutic games of their own and get them approved by the FDA, which is likely to consider such games as medical devices (they are not consumed by patients). I believe that the way FDA approves medical devices makes it easier for competitors to get similar games approved without having to finance new clinical trials. “Me too” game developers can use existing clinical data paid for by the “innovator” company as evidence of safety and efficacy.

Then there would be “over the counter” competition from games that do not have to be approved by the FDA as long as they are not marketed as being effective in treating a disease like Alzheimer’s (the marketers, however, can say things like “helps improve cognitive ability”).

Hey, I’m sorry to break your bubble — ie, hype — about the potential of gamification for the pharmaceutical industry in so far as treatment modality goes. It’s not that games may not be effective in the treatment of certain medical conditions — they could be. My point is that it is unlikely that traditional pharma companies will develop games for that purpose for the reasons cited above and in previous posts. That’s my opinion and I’m sticking to it!