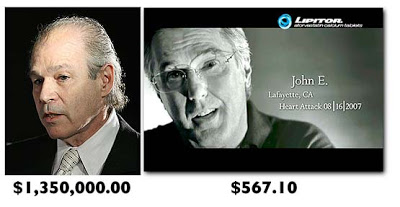 “The new television ad, set to debut Tuesday, features a testimonial from heart-attack survivor John Erlendson, a 58-year-old California talent agent. He didn’t take a cholesterol-fighting drug before his heart attack last year despite a history of high cholesterol, and his ad urges people in similar situations to be more proactive.” (See “Pfizer Drops Celebrity Pitch in New Lipitor Spots“).

According to the WSJ article, Erlendson will be paid “a union scale rate,” as opposed to $1.35 million that Pfizer paid Dr. Robert Jarvik for Lipitor ads that he famously appeared in (see “Jarvik: A Modern DTC Tragedy“).

You can’t get that information the SAG Web site — you have to be a member and although I am producing my own video commercials, I am not a card-carrying SAG member.

Using Google, however, I easily found a document from an agent’s Web site that outlined the rates for 2006 (see here). For “on-camera principals,” the rate is $567.10 (not including an $83.93 pension contribution).

Doing the math, I find that Pfizer will save $1,349,432.90 using Erlendson vs. Jarvik! The actual savings might be less if you factor in the recent increase in SAG union rates won as a result of the recent strike.

Whatever! Pfizer is saving a bundle!

I have a question for Mr. Erlendson: Are you independently wealthy? Are you getting “residuals” in the form of free promotion for yourself and your talent agency?

After all, if Mr. Erlendson can land this gig with Pfizer, he must be a damn good talent agent!