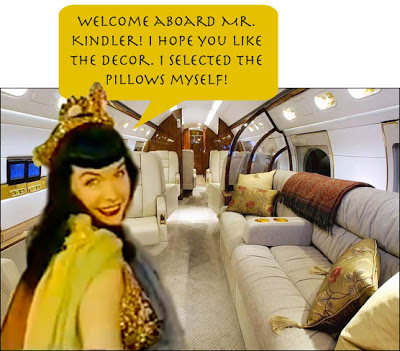 “Looking for a bargain on a corporate jet?”, asks FiercePharma’s Tracy Staton. “Pfizer is scouting for buyers for two of its Gulfstream aircraft, a Gulfstream V model and a Gulfstream 550. CEO Jeffrey Kindler’s aircraft perks cost Pfizer $175,210 in 2008. Ian Read, the company’s worldwide pharma president, got $129,850 worth of aircraft use, while CFO Frank D’Amelio’s use only amounted to $70,505 and R&D chief Martin Mackay’s was $40,834” (see “For Sale: Two Pfizer jets for $65M“).

Tracy kindly supplied links to photos of the jets, including interior shots.

The 2003 Gulfstream G550 is definitely my choice. I especially liked the way in which the interior was decorated. I’m partial to those harem-style throw pillows and blankets. I can only imagine what it was like for Jeff Kindler to climb on board (click the image to get an enlarged view).

I also imagine an on board theater where Jeff and the guys could view some old-fashioned stag movies while jetting around. The closest I can get to showing you what I mean is the following YouTube video of the notorious Bettie Page, who told PlayBoy “I never thought it was shameful [ie, her career as a pin-up girl and PlayBoy Playmate model]. I felt normal. It’s just that it was much better than pounding a typewriter eight hours a day, which gets monotonous.”

The Zubillaga Affair: Effect on the Prospects for Pharma Blogging