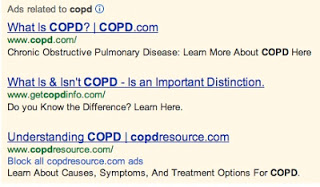 According to the U.S. Department of Health and Human Services, awareness of chronic obstructive pulmonary disease (COPD) has been rising gradually in recent years, but the results of a national survey show current awareness levels have returned to those of 2008 (see press release here). Sixty-five percent of adults reported that they have heard of COPD, compared to 71 percent in 2011. Among people most at risk for COPD, awareness stood at 74 percent for current smokers and 73 percent for former smokers; in 2011 these values were 78 percent and 76 percent, respectively.

This must be discouraging news to Boehringer Ingelheim (BI) and GSK, which have been running COPD awareness campaigns for several years. They are spending money, for example, on search ads such as the ones shown in the screen capture on the left.

BI and GSK have also used social media such as Twitter and Facebook to raise awareness about COPD and treatments for the disease.

BI has been especially active in COPD awareness campaigns since at least early 2010 when I first blogged about its “DRIVE4COPD” campaign, which involves posts to Twitter, Facebook, Flickr, and YouTube (see “Danica Patrick: NASCAR Driver, Super Model, Superbowl Lingerie Ad Model, & COPD Spokesperson All Rolled Into one!“). BI, however, recently dropped its sponsorship of DRIVE4COPD, which claims that 2,629,925 people have taken the COPD screener featured on its website.

“Although these current numbers do not indicate a trend, we are concerned that the awareness level has not continued to increase. We plan to use this as an opportunity to mobilize and re-energize our efforts.” said James P. Kiley, Ph.D., director of the NHLBI Division of Lung Diseases. “COPD is the only major chronic disease where deaths are not decreasing, which makes it critical for people to understand whether they are at risk for it and recognize its symptoms as early as possible. COPD can be treated – but the challenge is that more than 1 in 3 Americans do not know what it is or what its health outcomes are.”