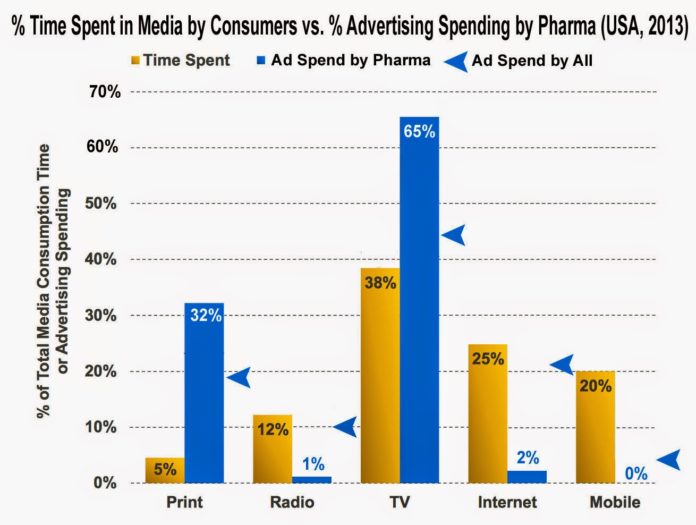 I came upon an interesting chart in Mary Meeker’s state-of-the-Internet slide deck. Meeker — formerly of Morgan Stanley, at VC firm Kleiner Perkins since late 2010 — each year produces a curated set of data reflecting what she sees as the major trends in Internet usage and growth. The chart (below) shows how American attention is divided among various forms of media and how that division lines up with where advertising dollars go, as I learned here.

I assume that the Ad Spending data reflect the average for all industries in the U.S. and the Time Spent in Media reflects what the average U.S. adult consumer (18 to 65 age range?) is doing.

Obviously, the main point is that too much ad dollars are going to print (newspapers and magazines) and not nearly enough are going to mobile and the Internet.

How does the ad spending by the pharmaceutical industry look when plotted on a similar graph?

I used Nielsen data for pharma direct-to-consumer (DTC) ad spending by medium — which you can find in the Pharma Marketing News article: “Pharma Promotional Spending in 2013” — to create the following version of the Meeker chart:

It seems that pharma marketers spend WAY too much on print advertising and TV and not enough on Internet, radio, and mobile advertising; i.e., the same as all industries but much, much more skewed.

But what seems to be a misalignment of advertising budgets may actually make sense if you consider the typical target demographic of the pharma industry — older folk and mostly women. Obviously, the older you are the more likely you are to suffer from some medical condition for which pharma has a pill. And we all know that women are the caregivers and tend to visit the doctor much more often than do men.

What about radio? Advertising on radio is a waste of time for the pharmaceutical industry, IMHO. Graphical imagery and video better convey the message of hope and branding that pharma marketers are aiming to get across.

And mobile? I just don’t know if mobile ads — other than text messaging — is mature enough to satisfy the needs of pharma marketers. The small screen of most mobile devices is also a problem, especially when you have to include all the necessary fair balance.

Don’t get me started on why pharma marketers don’t spend more on Internet advertising. I’ve written extensively about that elsewhere.

Still on the Road – in Miami