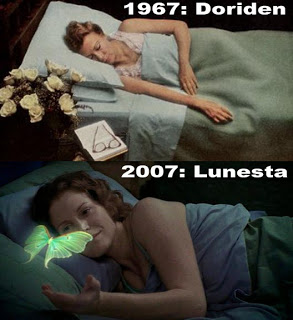 “It doesn’t hurt to take a walk down memory lane and look back at how far the industry – and its marketers – have come,” says Wendy Blackburn in a recent ePharma Rx Blog post entitled “Pharma Marketing: We’ve Come a Long Way, Baby.”

In that post, Wendy included a vintage Thorazine ad that appeared in a 50’s or 60’s medical journal. “Tyrant in the house?” asked the ad. “Thorazine can control the agitated, beligerant senile. And help the patient live a composed and useful life.”

You can visit Wendy’s blog to see an image of the ad. The original ad can be purchased from Deco Dog’s vintage ephemera and collectibles Web site.

I went to Deco Dog and found some evidence that pharma marketing may not have come as far as we may think. Modern day ad agencies may have been inspired by old ads and copied some their motifs — at least in the “sleep aid” drug category.

See, for example, the composite image at the left. On top is imagery from a 1967 ad for Doriden (glutethimide), which the ad proclaimed to be “the most widely prescribed night-time sedative in office practice…”

There are similarities between the sleeping figure in the Doriden ad and the images I have seen in Lunesta ads — even down to the green color of the blankets. The moth, however, appears to have replaced the bedside book and white roses — all of which may be symbols of something psychological that is beyond my ability to dechiper.

According to the United States Pharmacopeial Convention:

“Glutethimide was introduced in 1954 as safe barbiturate substitute. Experience showed, however, that its addiction liability and the severity of withdrawal symptoms were similar to those of barbiturates. In 1991, glutethimide was transferred into Schedule II in response to an upsurge in the prevalence of diversion, abuse and overdose deaths, making it an illegal substance in USA as well as a number of other countries. It is classified as a sedative-hypnotic.”

I wonder if one or more of the current “sleep aid” drugs will suffer the same fate?