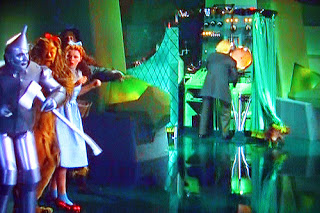 Like the Wizard of Oz performing his “magic” behind the curtain, there may be many pharma “wizards” happily managing social media projects behind the scenes and out of public view. All it takes is a new age “Dorothy” to pull back the curtain. That “Dorothy” is Jess Seilheimer (@Jaeselle), who alerted me about the possibilities in a comment to yesterday’s post  about Shwen Gwee (see “Happy Pharma Social Media Halloween!“). Shwen leads Digital Strategy and Social Media within the Marketing department at Vertex Pharmaceuticals.

There’s a bit of a brouhaha coursing through Twitterdom and the pharma blogosphere about Shwen. Some critics (eg, Rich Meyer, @richmeyer) say that Shwen “has not really done anything of substance yet and works for a company that does not even have any approved drugs yet.” I pointed out that “Shwen may actually be working on … a [social media] project within Vertex but not talking about it.”

Today, the WSJ  published an article touting a drug under development at Vertex that may CURE Hepatitis C! (see “New Hepatitis C Drugs May Be Blockbusters“). Surely, Shwen is hard at work “behind the curtain” developing a social media marketing strategy that will launch in concert with the new drug. In fact, as Jess points out, there may be “plenty of initiatives that pre-launch brands focus on in this phase, some of which may not be public knowledge.”

Here is what Jess had to say about that and other ways that pharmaceutical companies may be using social media “behind the curtain:”

I’m of the belief that no one should try to validate who “does what” in social media when you’re only qualifying it to an approved brand or initiatives in the public domain.

Exhibit A) There are plenty of ways to utilize social media engagement and digital channel in the pre-launch market awareness phase. Initiatives that pre-launch brands focus on in this phase, some of which may not be public knowledge.

Exhibit B) There are also corporate level initiatives that utilize building policy around a company’s POV on how they approach using these channels to optimize their communications.

– these initiatives happen behind the scenes for months

– corporate level investment in internal staff onboarding, education and applicability of using social media as a means to communicate internally with each other.

My point: Having a public brand/corporate supported “patient community” does not equate to “I have done social media’, and we should use caution when trying to qualify someone;s knowldeg or within the area. Lastly, let’s please consider using appropriate terminology when referring to utilizing social engagement channels for our business/brand objective– it’s not “doing social media”.

Al things to take into consideration when proclaiming “people haven’t done anything in social media”.

They are.
We all are.
You may just not know it.

Back to School for Takeda, Rozerem, and Abe Lincoln!