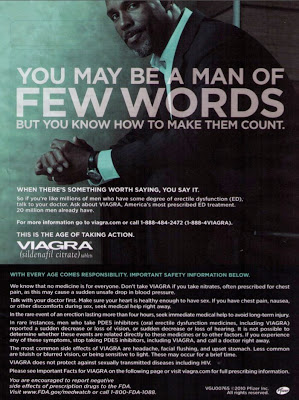 I came across this Viagra print ad in this week’s Time magazine.

“You may be a man of FEW WORDS,” proclaims the large headline of the ad, “but you know when to make them count. When there’s something worth saying, you say it.”

I will try and be a man of few words as I critique this ad; you tell me if they are worth anything.

This ad is a bit unusual in several respects, the most important of which is that it is “dark.” The ad’s dominant color scheme is black and dark green, which is more reminiscent of ads I’ve seen for men’s deodorants in Playboy magazine, which I read for the interviews.

The ad also prominently features an African-American male. I suppose not enough men of color are speaking up and asking their doctors about Viagra.

It’s a fact that a higher proportion of blacks in the U.S. — but NOT worldwide —  have high blood pressure than whiles (41% of blacks have high blood pressure, as compared to 27% of whites; see here). One complication of high blood pressure is erectile dysfunction. The connection between high blood pressure and ED used to be the focus of ED awareness ads way back when certain lawmakers were critical of daytime DTC ads in the category (see “Deconstructing Frist on DTC“). I guess that wasn’t enough to convince blacks to be a “man” and ask their doctors about Viagra. A more dramatic appeal to “machismo” such as in this ad seems necessary.

To keep this to as few words as possible, I will not talk about how often I have noticed that the men in many of these erectile dysfunction ads seem a lot younger than warranted by the incidence of ED in men under 40 (in the UK, Lilly targets men OVER 40 in its “40over40 ED Awareness Campaign“). Pfizer covers its ass on  this point by using these few words: “so, if you’re like millions of men who have some degree of erectile dysfunction…” [my emphasis].

Here’s something worth saying: what man among us has NOT had some degree of ED at one time or another (see, for example, “You Must Score Better than 84% on Viagra’s Sexual Health Quiz to NOT Have Signs of ED“)? We can ALL relate to that and also to the closing machismo statement, just before the VIAGRA logo:  “THIS IS THE AGE OF TAKING ACTION.”

At the beginning of the “fair balance” portion of the ad — the part that contains MANY words — Pfizer qualifies the “age of action” call to action by saying that “with every age comes responsibility.” This is another machismo axiom. “Dude,” Pfizer seems to say, “you are responsible for your actions. If you suffer any of the following side effects, that’s your responsibility. We warned you!”

J&J, BTW, IS Donating to Haiti Relief But Won’t Say How...