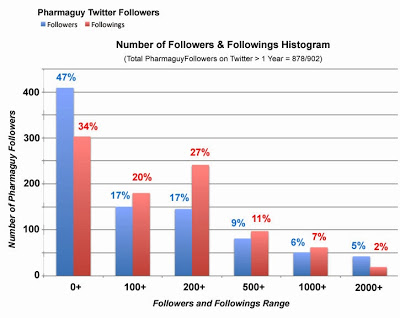 Most of the members of this list are pharmaceutical marketing Managers, Directors, and VPs. They are “pioneers” because so few of their brethren have Twitter accounts. In fact, I know of no pharma company CEO who has a twitter account. And that could be a sign of a problem that was noted today in a USAToday opinion piece by Michael Wolff titled “How CEOs are clueless about technology.”

“there are few CEOs,” says Wolff, “who can get their heads around the notion that their main, value-added and distinguishing products are not the cars they manufacture, or credit they supply, or hotel rooms they offer, or merchandise they stock, but the process by which consumers interact with what is being sold.”

It used to be that most pharmaceutical company C-suite executives started at the “bottom”; i.e., as sales reps, carrying the bag and learning the business. Some still do.

I just finished updating my public database of Pharma Twitter Pioneers that I maintain on Google Docs here. This database current contains 122 names of pharma executives, including their Twitter account metrics (number of tweets they have made, number of people they follow and who follow them on Twitter), their job titles, the companies they work for, LinkedIn addresses and profiles, and my personal notes that link to other information about them.

I started building this database two years ago. Since then, several people have left the employ of big pharma and set up their own consultancies. At least 6 people have done this within the last 2 years. I’m not sure if this is a trend whereby digital innovators are leaving pharma to expand their horizons after being rebuffed within pharma. Nevertheless, there are enough people who do this to warrant a separate list! I’ll be watching to see who else abandons the pharma digital boat in the future.

Wolff blames the government’s health exchange website problems on “middle men eager to be paid for deploying and supporting technology (they call it supplying solutions), who themselves know only slightly more about it than the people hiring them.” This sounds a bit like my criticism of pharma agencies who have caused digital problems for the industry (see, for example, “AstraZeneca Hosts ‘Take on Depression’ Facebook Discussion – Seroquel Lurks Behind the Scenes” and “Pfizer, If You Are So Smart, How Come You Were Hacked By ‘Kiddies’?”

While some Pharma Twitter Pioneers are leaving their companies for greener pastures in agencies, others are being promoted or moving to new companies. This is a good sign. There are now at least 10 VP-level executives in the list. I have hopes that one day a pharma CEO may make the list.

I created a couple of histograms from the Twitter data in my database. The first one gives you an idea of the number of tweets made by my pioneers (click on image for an enlarged view). 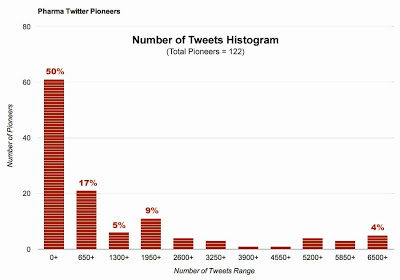 Considering that practically all of these people have had Twitter accounts for at least 2 years, they have made relatively few tweets. Whereas I average about 225 tweets per month (2,700 per year), members of my list make, on average, about 32 tweets per month (400 per year) assuming they have been tweeting for two years. Fifty percent of the members have made less than 650 total tweets. Almost one-quarter have made less than 100 tweets! Mark Krajnak (@MarkKrajnak), who is in Corporate Communications at Johnson and Johnson, has posted over 17,000 tweets!

It’s not the number of tweets, but the quality, that counts. Also, many tweets from this group are personal and have nothing to do with the pharma industry. Nevertheless, it is interesting to see what interests Pharma Twitter Pioneers. Here’s the tweet stream from members of my list: 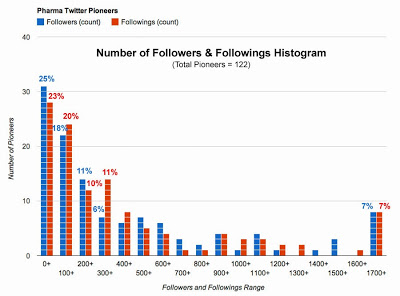 It’s interesting that quite a few (7%) “pioneers” on my list are true pioneers in that they follow a lot of people and a lot of people follow them. On average, at this point in time, the members of my pioneer list follow 521 people (“followings” in the above chart) and are followed by 644 people (“followers”).

It’s no surprise that the “pioneers” who are responsible for social media and digital initiatives follow the most people and have the most followers. Jeordan Legon (@jlegon), Head of Internet/Social Media at Roche Pharmaceuticals, has the most followers (12,949) yet he only follows 1093 people. Dennis Urbaniak (@durbaniak), VP at Sanofi US Diabetes, on the other hand follows the most people (4651) and is followed by 4516 people — a nearly perfect 1:1 ratio! Who do you think will be CEO one day?

I’m not sure how typical or untypical the followers/followings distribution of my pioneers is compared to the general population. So, I prepared a similar histogram of about 900 of my Twitter followers who have been on Twitter for more than 2 years (click on image for an enlarged view).

The difference is the “outliers” among the Pharma Twitter Pioneers — those who are extremely active on Twitter. These are the ones who are currently “carrying the digital bag” at pharma. Let’s continue to watch them 🙂

Filling the Social Media Void: Shout or Be Shouted At!