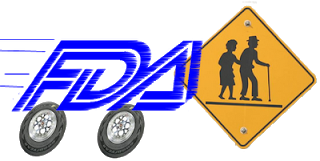 According to a study published by JAMA Internal Medicine, 80% fewer patients were studied as part of expedited reviews of new drugs approved by the U.S. Food and Drug Administration (FDA). Not only that, but many of the required postmarketing studies of these drugs were not completed after 4 years!

Here’s the relevant section of the press release:

Thomas J. Moore, A.B., of the Institute for Safe Medication Practices, Alexandria, Va., and Curt D. Furberg, M.D., Ph.D., of the Wake Forest School of Medicine, Winston-Salem, N.C., examined development times, clinical testing, post-market follow-up and safety risks for the new drugs approved by the FDA in 2008, when most provisions of current law, regulation and policies were in effect.
That year, the FDA approved 20 therapeutic drugs (eight under expedited review and 12 under standard review). The study findings indicate that expedited drugs took a median (midpoint) of 5.1 years of clinical development to get marketing approval compared with 7.5 years for the drugs that underwent standard review, according to the study results.

The expedited drugs were tested for efficacy in a median 104 patients compared with a median 580 patients for standard review. By 2013, many postmarketing studies to gather additional evidence on the safety of expedited drugs had not been completed, according to researchers.

“The testing of new drugs has shifted from a situation in which most testing was conducted prior to initial approval to a situation in which many innovative drugs are more rapidly approved after a small trial in a narrower patient population with extensive additional testing conducted after approval,” the authors conclude. “Our findings suggest that the shift has made it more difficult to balance the benefits and risks of new drugs.

In a related commentary, Daniel Carpenter, Ph.D., of Harvard University, Boston, writes “If the FDA’s requirements for new drugs, both premarket and postmarket, are weakened, trust in both the efficacy and safety of prescription drugs is likely to be weakened. The stakes of the current policy debates could not be higher. There is scarcely a feature of the American health care system that does not depend on evidence-based trust in prescription drugs, ratified and enforced by the FDA.”

You may also be interested in reading this: “FDA Caught Speeding. Puts Public Safety at Risk.“