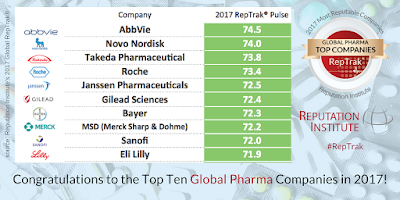 Depending on who you ask, the drug industry’s reputation is at an all-time low (read, for example, “Pharma’s Rep Among Patient Groups Sinks to Near Historical Lows“) or an all-time high!

According to Reputation Institute’s annual Global Pharma RepTrak®, which uses the former protocol, the reputation of the pharmaceutical industry is “improving and is now at a strong level with the general public (see the story embedded at the end of this post by clicking on “Read more >>”). I emphasized “general public” because this is misleading – further on in the press release you can see that what they measured are the attitudes of only a segment of the general public – those who are familiar with the companies.

In any case, here’s the ranking of the top 10 companies according to Reputation Institute:

“Fake Advertising”: Allergan Should Be Red in the Face for Using...