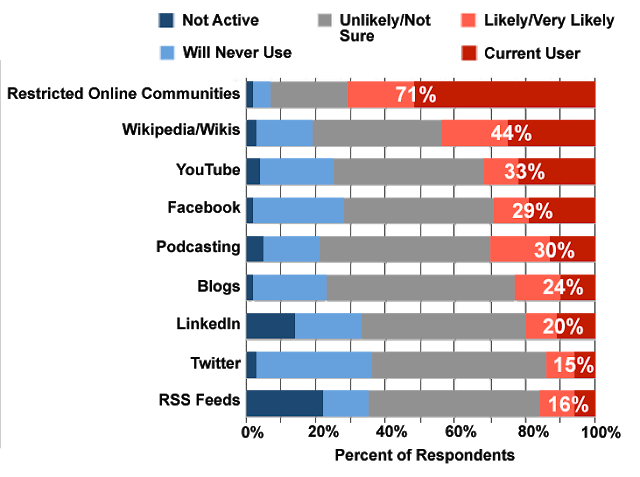 Research sponsored by Pfizer and published last month in the Journal of Medical Internet Research, found that over 70% of physicians surveyed (N=485) are either “current users” (52%) or “likely/very likely” users (19%) of “restricted online communities” (such as Sermo). In this case, “use” means sharing medical information and staying up to date professionally. The following chart is a remake of Figure 2 from that study (find it here).

This survey was conducted in March 2011.

According to Manhattan Research’s Taking the Pulse® v11.0 study (May 2011), only about a third of all “digital” physicians (24% of all physicians) are using gated physician peer communities like Sermo, Medscape, DrConnect, PhysicianConnect, Ozmosis, etc.

Some experts, such as Bruce Grant, SVP of Strategic Services at Digitas Health, in the past have cited other, conflicting data that suggests physicians interested in using online peer-to-peer social communities outnumber by 2 to 1 physicians who are actually using them (see “Physician Participation in Peer-to-Peer Social Media Sites“; use discount code P2Pfree).

52% or 24%, whatever! The number of physicians using gated social media communities for professional purposes far exceeds the number of physicians using “open” communities such as Twitter or Facebook. Only 7% of surveyed physicians say they use Twitter in order to share medical information and stay up to date and 36% of said they either were not aware of Twitter (3%) or said they would never use Twitter (33%) for such purposes (another 50% said they were unlikely or not sure if they would use it)!

Meanwhile, the use of Twitter by patients/consumers seems to be on the rise. Twitter reports that tweets about health are up 51 percent this year (see “Twitter Courts Healthcare – But Cautiously“).

AstraZeneca’s Timely CRESTOR Branded Blog Post: Did It Violate Its Own...