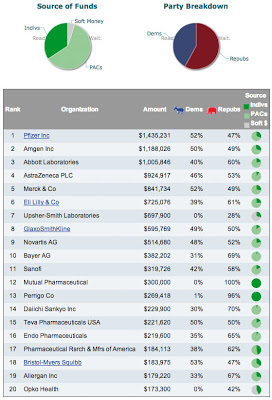 Here’s an update on the political contributions of the health/pharmaceutical industry according to the Center for Responsive Politics.

Can it be said that “As goes Big Pharma, so goes America?” Time will tell. But if money is the determining factor, Obama is destined to be a one-term president.

Here are updated charts with details about the donations of the top 20 pharma contributors (click here for source):

To make it easier to see which pharma company employees/PACs are “Republican” and which are “Democrat,” I prepared this chart from the table above (click on image for an enlarged view). 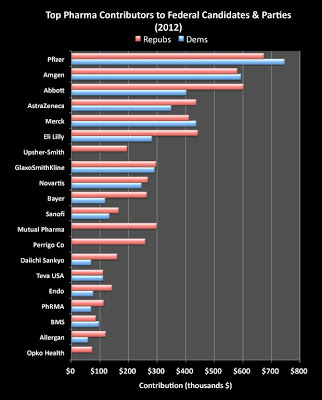 There are several decidedly “Republicans” in the Big Pharma group, including Abbott, Astrazeneca, and Eli Lilly and a few so-so “Democrats”: Pfizer, Amgen, and Merck.

FTC, Generics, and the War in Iraq