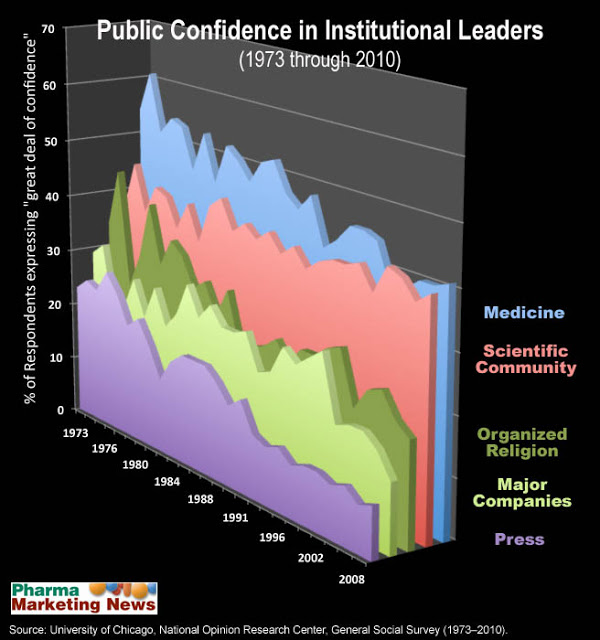 Michael Ritchie, Postdoctoral Fellow at Pfizer, recently posted to the Think Science Blog that he was NOT surprised that the American public “lost significant trust in the institutions of education, the executive branch of the federal government, organized religion, congress, banks/financial institutions and the press” over the period from 1973 through 2010. He cited results of a study conducted by the University of Chicago, National Opinion Research Center.

“In contrast,” Richie said, “the American public’s trust in the scientific community remained virtually unchanged over this period” (see “Perspectives from a Postdoc: The Public’s Trust of Science“).

Ritchie may have been using “Science community” as a surrogate for the pharmaceutical industry, which wasn’t a specific category included in the study. What Ritchie didn’t mention, however, is that public confidence (which is what the study actually measured, not “trust”) decreased more or less “significantly” with regard to “Medicine” and “Major companies,” two other — perhaps more relevant — surrogates for the pharmaceutical industry.

I plotted the data for Medicine, Science, Organized Religion, Major Companies, and the Press in the following chart. You can find the complete set of data here.

What do you think is the better indicator in this study for the trend in public confidence in the pharmaceutical industry? Science? Medicine? or “Major Companies?”

BTW, if you look at the public’s confidence in Congress and the Executive branch of government, you will see that it bounces up and down according to the political atmosphere and whether or not we are war. It’s hard to say if there was a significant decrease over the years.