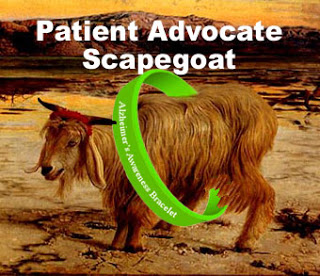 “Few people in pharma or the investment community were surprised at bapineuzumab’s failure, as most odds makers put its chances for success at approximately 25 percent,” said Daniel R. Hoffman, Ph.D., in a post to the Philadelphia Inquirer Check Up blog (see “Choosing between baldfaced political lies and Pharma’s half-truths“).

Bapineuzumab is an experimental drug for the treatment of Alzheimer’s Disease (see “Pfizer and Janssen Halt Alzheimer Drug Development: Why Not Try Gamification?“).

“But why do pharmas advance poor prospects to expensive, Phase 3 testing and throw half a billion dollars of shareholder money out the window in the process?”

The former head of Pfizer’s R&D, John LaMattina, offered the following as a possible answer:

“Perhaps the answer lies the fact that there were groups of stakeholders who desperately wanted bapi to advance. AD [Alzheimer’s Disease] patient advocacy groups would top the list. These people, who are doing their utmost to help find any treatment for this disease, would have been outraged had bapi been dropped at phase 2. Furthermore, their concerns would have been supported by leading experts in the field. Back in 2008, many of the leading experts in AD strongly believed in the science behind bapi and they would have been quite negative about ending the bapi program. Finally, dropping bapi would have caused public relations damage. Imagine the headlines: ‘Big Rich Pharma Companies Dump Promising Drug For AD. Patients, Scientists Crushed.’”

LaMattina says that he “had no part in the bapi discussions,” but he suspects that Wyeth/J&J “knew that bapi had less than a 50-50 chance to succeed” and he agrees that it was a $400 million dollar gamble.

Obviously, LaMattina is just speculating on the role that Alzheimer patient advocates may have had on the decision to proceed with the phase 3 trials of bapi. But I seriously doubt that the “deciders” were worried about bad publicity if they refused to take the gamble. Drug companies, after all, pay corporate communications professionals big bucks to favorably “spin” bad news.

“Patient advocacy groups can exert some effect,” said Hoffman, “but basically they stand several rungs down the influence ladder from the greed, ego and similar motives of senior executives. The area where patient advocacy groups scream the loudest concerns the exorbitant pricing of drugs for their respective therapeutic areas. Yet pharmas seldom let these plaintive cries influence their inexorable price increases. Certainly the patient groups didn’t deter pharma’s industry-wide strategy of pricing as many new products as possible at the vastly higher level of biologicals and, for some, even into the orphan drug stratosphere.”

Dr. Hoffman complains of “half-truths and misdirecting statements that pharma’s cheerleaders now communicate regularly” when referring to LaMattina’s analysis. LaMattina, said Hoffman, “didn’t place even a smidgeon of responsibility at the feet of fiduciary officers and senior R&D people who receive bonuses based upon the number of compounds they advance to Phase 3. Nor did he state that C-suite people uniformly believe they look better to shareholders by throwing a Hail Mary pass against a stacked secondary, rather than limiting their losses by punting the ball.”

Football: Another reference to games! See my post cited above.

Obviously, drug development is a risky business – high risk vs. high reward. These days, however, the rewards are less “stratospheric” than they used to be.

Instead of looking for scapegoats — whether they be patient advocates or C-suite football quarterback wanabees — we should talk about the broken pharma business model and how to change it to be less risky. A guest Forbes post by Christopher Bowe, the US Healthcare Analyst at Informa Scrip, addresses this issue in his analyis of the bapi failure:

“To save itself – and save more patients – the industry should take two vital steps: develop a more flexible approach to drug approval and patent exclusivity and change its business model to encourage more scientific collaboration among companies,” said Bowe. “The first change is relatively closer to our grasp; the second requires a sea change in the industry” (see “Big Pharma Failures Light the Way to Change“).

An open crowd-sourced approach to pharmaceutical research is not a hairbrained idea. An article in today’s Wall Street Journal describes how the U.S. military is using crowdsourcing to design a new amphibious vehicle for the Marines (see “Tapping Crowds for Military Design“; subscription required). “The Defense Advanced Research Projects Agency, known as Darpa, is preparing to assess whether crowdsourcing, a freewheeling collaborative method sometimes used to develop software, can be an effective means of designing military equipment.”

IMHO, if the military can handle open source data sharing without revealing secrets, so can the pharmaceutical industry.