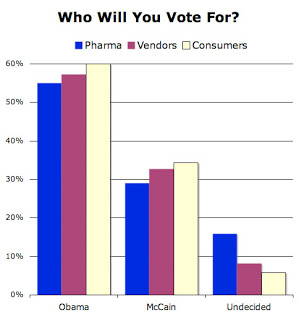 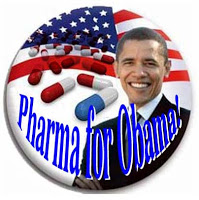 These are the latest results (results as of October 9, 2008) from the Pharma Marketing News “Who’s Better for Pharma: Obama or McCain?” online survey, which is the only survey that is specifically targeted to a broad range of professionals working within and for the pharmaceutical industry.

You can read a summary of the results to date from the survey in the October, 2008 issue of Pharma Marketing News (download the article at no charge here: http://www.pharma-mkting.com/articles/pmn78-article01.pdf). The survey is still available here and you can access the latest results — minus identities of respondents and their open-ended comments — up to election night here.

Obama is also favored by a majority of vendor/agency employees (57%) and consumers (60%) as shown in the chart on the left.

Breaking the results down according to level of support for the pharmaceutical industry, Obama is the favorite among both the supportive and unsupportive/neutral camps (see Figure 4 in article).

Obama also leads McCain 48% to 43% among respondents who claimed to be “very supportive” of the drug industry.

The latest New York Times/CBS News poll of probable US voters found that if the election were held today, 53 percent of voters said they would vote for Mr. Obama and 39 percent said they would vote for Mr. McCain (see “Poll Says McCain Hurts His Bid by Using Attacks“). This is consistent with the overall results of the Pharma Marketing News survey, where 57% of US respondents said they plan to vote for Obama and 32% for McCain.

Markets as Conversations: Can You Have a Discussion with “Psoriasis 360”...