There was also this @eyeforpharma tweet: “Save pharma sales from extinction. This is serious. http://youtu.be/gCDeBAD75Pg #savepharma #e4p #hcsmeu #hcsm #pharma”

So why am I doing this?

In typical UK parlance, I just think what E4P is doing with YouTube and Twitter to promote its Sales Force Effectiveness Conference (find it on the PMN Calendar here) is “brilliant,” by which I mean interesting and funny, almost “snarky” to borrow another UK phrase.

I am reviewing this here because I wonder if pharma companies can use some of the same social media techniques to promote their products or other special interests.

The YouTube video that @eyeforpharma thought I would like is titled “REVEALED: E4P Nature documentary discovers reps in the wild.” It’s a spoof of how pharma sales reps have been known to pursue physicians to detail them about Rx drugs. It’s done in the style of David Attenborough’s famous Life on Earth nature shows, portraying sales reps as wild animals seeking their prey.

The description associated with the video tells the story:

Join us as we journey to the edge of civilisation where pharmasuiticus rep can be seen in its natural habitat. In order to prevent the extinction of pharma sales entirely, CLICK HERE: http://bit.ly/prevent-extinction

Only a few dying remnants of this species now remain. The E4P team have managed to capture the last of this species and are urgently recommending immediate action in order to revitalise the remaining population.

Thank you also to our intrepid camera crew at www.stantonmedia.com for their courage in coming into such close contact with these dangerous animals.

If you would like to participate directly in the effort to save pharma sales from total extinction then please email psimms@eyeforpharma.com

The video ends with the message “Your customers have evolved? Have you?” and a link to the conference site.

The last sequence in the video shows the “alpha rep” eating an iPad, which also emphasizes the “unevolved” nature of many pharma sales reps; reminiscent of the apes gaping at the obelisk in Kubrick’s film 2001. Here’s a screenshot: 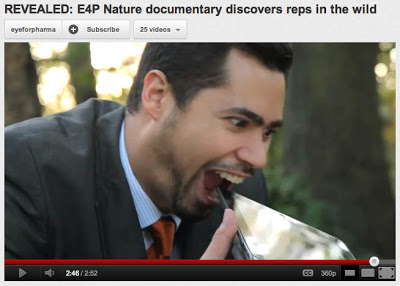 Is it just me or doesn’t this guy look like Paul Simms, the co-founder and chairman of E4P? Here’s Paul as seen on the @eyeforpharma Twitter page:

A video like this must cost a pretty pence! So, it’s frugal to use employees as actors. Unless, of course, the video was paid for by one of the sponsors of the conference. I don’t see any sponsorship message though.

But how effective will this video be in promoting the conference and increasing registrations? It’s gotten  only 172 views as of this post, but I am sure it will get many more now that I have featured it here!

One last thing. I worry about using Twitter’s direct messaging (DM) service to do promotions like this. I know Paul personally and whenever he sends me a DM, I open it. I don’t know how many other people Paul has DM’ed about this video or if he used an automated service to send out the same DM to ALL of the followers of @eyeforpharma. But if I start to get bombarded (“blasted”) with automated DMs from people I follow on Twitter, I will not be a happy camper. To be clear, E4P has NOT sent me many DMs at all.

I use my @pharmaguy Twitter account to send out promotional messages to followers, but I do NOT send automated promotional DMs in a single “blast” to all my followers. I feel that my followers did not agree to that. I do, however, send out one automated DM to each new follower thanking the person for following me and requesting that they fill out my follower survey (see results of that survey here).

Anyway, kudos to E4P for a fun promotion.