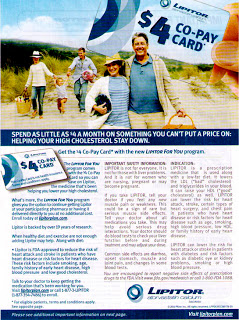 “The LIPITOR FOR YOU program comes with the $4 Co-Pay Card so you can save on Lipitor, the medicine that’s been helping you lower your cholesterol.” So says Pfizer’s new direct-to-consumer (DTC) campaign (see ad from the current issue of Newsweek on the right; click to enlarge).

I suspect we’ll also be seeing these ads on TV soon. The ad, which features a nice family day at the beach, will put most people in the U.S. in a good mood when the ads run starting in January 2012, just prior to beach season!

The question is, will Pfizer spend as much on Lipitor DTC advertising as it has done in the months prior to Lipitor’s loss of patent protection?

I have already noted in a previous post that Lipitor was the #1 most-advertised Rx drug in 2010, a year in which Pfizer spent a whopping $272 million on DTC Lipitor ads (see “Double Dip in DTC Spending Plus 33% Drop in Internet Display Ad Spending!“). This number refers only to “measured media” ad spending and does not include search engine online advertising (but does include, I believe, online display advertising).

But, even Pfizer admits Lipitor revenue will dramatically decrease and it only has 180 days before the real competition starts. Therefore, it must do a whole LOT of DTC advertising in the next 90 days to reap the benefits. Still, I doubt it will spend anywhere near $272 million. My guess would be half of that.