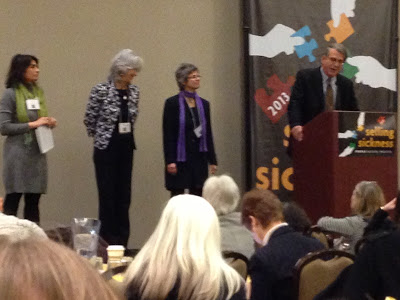 I am a fish out of water here at the 2013 Selling Sickness conference in Washington, D.C. Although the theme of the conference — “People Before Profits” — resonates with a lot of public relations rhetoric of big pharma companies (e.g., “Merck. Where patients come first”; see here), the speakers and attendees at this conference REALLY mean it!

I’m an outsider here because I am a pharma “insider” in their view. And, as keynote speaker Sidney Wolfe, MD (Public Citizen) said: “we [they] are at war with the pharmaceutical industry.” Or maybe he said the “medical-industrial complex,” which was how a number of speakers characterized the relationship between the drug industry, medical professionals, and the FDA. Here’s Wolfe and other keynote speakers, Jeanne Lenzer (immediate right to Wolfe) and Shannon Brownlee (journalists):

I am not sure if Leonore Tiefer and Kim Witczak (@woodymatters), the conference organizers, invited any pharma representatives to speak or attend this conference. That would have been interesting if there were any pharma guy or gal brave enough to accept. But, I don’t want to cast this in too much of an “us vs. them” light because pharma should try to open up a dialogue with the patient advocates, caregivers, doctors, nurses, public health people, and academics who attend this meeting. It will give them a new sense of what “patient empowerment” really means.

Many attendees I met were caregivers with close relatives who they believe have been victims of the “medical-industrial” complex. Kim Witczak’s husband Woody, for example, died of a “Zoloft-induced suicide” at age 37 (see here). Ginger Taylor (@GingerTaylor), VP of the Canary Party, has a son — Chandler — who “regressed into autism following his 18 month vaccinations.” I put these claims in quotes because as “we” all know, there is no proof that drugs and vaccines cause such harm.

But what we “know” may need to be revisited. When I tweeted a stat Wolfe dropped during his presentation that “adverse drug deaths is 3rd leading cause of death in US,” Adam Jacobs (@dianthusmed) responded: “Hasn’t that “3rd leading cause” statistic been debunked many times over?” And when I told Ginger that the study linking autism to vaccination was a fraud, she responded with several other studies that “prove” a link, studies that she says the media do not mention.

Any way, I have to go. The second day here at Selling Sickness is about to start. I have embedded the #sellingsickness Twitter chat stream below. Hopefully it works and you can follow the conversation.