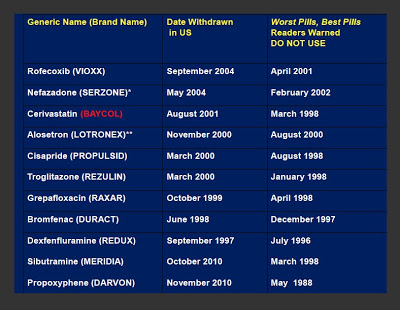 One of the main “weapons” Wolfe proposed to help win the war against what he sees as the dangers of FDA-approved drugs is his “Seven-year Rule for Safer Prescribing – No prescribing or imbibing any new drug, except true breakthrough drugs, for the first 7 years after approval.” Here’s the rule described in Australian Prescriber:

“You should wait at least seven years from the date of release to take any new drug unless it is one of those rare ‘breakthrough’ drugs that offers you a documented therapeutic advantage over older proven drugs. New drugs are tested in a relatively small number of people before being released, and serious adverse effects or life-threatening drug interactions may not be detected until the new drug has been taken by hundreds of thousands of people. A number of new drugs have been withdrawn within their first seven years after release. Also, warnings about serious new adverse reactions have been added to the labelling of a number of drugs, or new drug interactions have been detected, usually within the first seven years after a drug’s release.”

And here’s an auto snippet of Wolfe’s presentation that includes the 7-year Rule and other “solutions”:

“People Before Profits” was the underlying theme of the Selling Sickness conference. Wolfe’s 7-Year Rule would certainly kill profits, but it may also kill people (or keep them sick).

P.S. In a comment to this post, Medskep asks: “Please provide some examples of new Rxs that proved to be so effective that lives were clearly saved in the first seven years.” I don’t have specific data about that. It’s difficult to prove that drugs save lives. It is easier to prove that Wolfe’s argument has some merit in that many of the drugs his organization petitioned FDA to remove from the market have subsequently been removed — mostly within 7 years of Wolfe’s petition. Wolfe demonstrated this in the following table taken from his presentation (find the his presentation attached here):