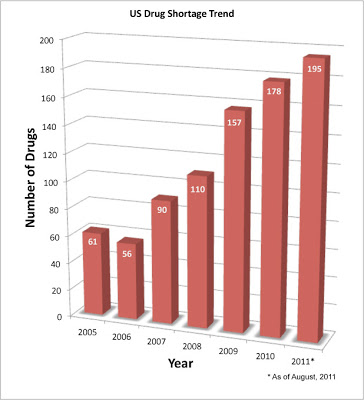 “The drug industry is floundering in its ability to provide the public with many of the basic medicines that are absolutely required for the treatment of a host of diseases,” said Paul Torrence, former Section Chief, MIH, in a recent OpEd piece (see here).

Torrence called for a National Institute of People’s Medicine that “would ensure that drug inventories are always well stocked. It would additionally be the driver and funder of cutting-edge drug discovery and development for antibiotics. Working through out-sourcing and contract mechanisms, the NIPM could rejuvenate research funds-deprived academics and mobilize small pharma to manufacture requisite medicines.

According to the FDA, “In 2010, there were 178 drug shortages reported to the U.S. Food and Drug Administration, 132 of which involved sterile injectable drugs. In 2011, FDA has continued to see an increasing number of shortages, especially those involving older sterile injectable drugs. These shortages have involved cancer drugs, anesthetics used for patients undergoing surgery, as well as drugs needed for emergency medicine, and electrolytes needed for patients on IV feeding” (see Drug Shortage FAQs).

Various causes of the current crisis have been suggested: (1) manufacturing quality issues, (2) market manipulation (eg, price gouging), (3) mergers of pharma companies who cut out low profit margin drug lines, and (4) lack of profits to be made from certain generic drugs.

Whatever the cause, the American Society of Health-System Pharmacists (ASHP) calls the current drug shortage in the US a “crisis” (view this video — interview at 36 mins, 30 seconds).

The last time we heard of a crisis affecting the entire nation was the 2008 “financial” crisis. That was met with swift action by the US government, which intervened in the market to help ward off the crisis in lending (ie, shortage of money).

Can the United States Ensure an Adequate Supply of Critical Medications?

That’s the question ASHP asked in an FDLI Food & Drug Policy Forum article (attached to above cited post), the introduction to which states:

“This dramatic rise in the extent, duration and severity of shortages is occurring in an environment that is characterized by a near absence of communication between drug manufacturers and the Food and Drug Administration (FDA). This lack of transparency is a significant barrier to efforts to address drug shortages, and it represents a real and growing danger to patient safety. FDA has worked diligently to address this issue, but this work is hampered by the agency’s inability to require reporting of information that could be instrumental in minimizing the impact of a shortage or averting it all together.”

Did FDA Entrap Google with Those 14 NOV Letters?