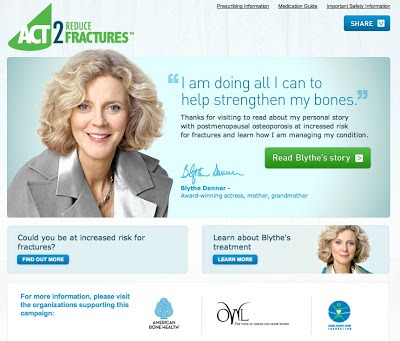 Amgen — the company that along with Pfizer signed on Phil Mickelson to shill for ENBREL — has now signed on Blythe Danner to shill for PROLIA, a drug to treat postmenopausal osteoporosis (see the press release here).

You are probably not OLD enough to know who Blythe Danner is, but postmenopausal women probably remember her in such classics as To Kill a Clown (1972), or as Robert De Niro’s wife in the acclaimed series Meet the Parents, Meet the Fockers, and Little Fockers. If you are not yet of menopausal age, you no doubt have heard of Blythe’s equallly environmentally friendly daughter, Gwyneth Paltrow.

Depending on the patent expiry of PROLIA, Gwyneth might one day also be a PROLIA spokeswoman. Gwyneth is currently 39 years old, whereas Blythe is 68. Hmmm… 29 years difference. By the time Gwyenth is menopausal PROLIA is sure to be off patent — unless, that is, AMGEN comes up with a new formulation for the drug.

It seems there’s not enough room in the postmenopausal osteoporosis celebrity spokeswomen market for two aging stars. Sally Field, who shilled for BONIVA for many years, is no where to be seen on the BONIVA web site. She has been replaced by generic postmenopausal women as in the screen shot below: 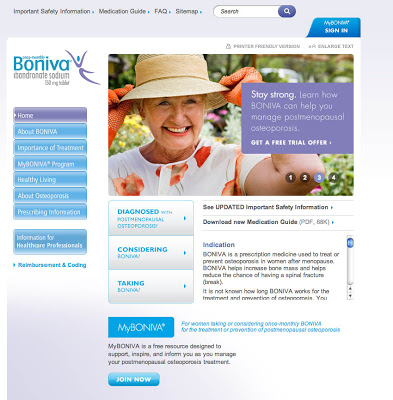 Cute, but no Sally Field!

Come to think of it, I haven’t seen Sally on TV in a long while. I mean on a TV commercial for BONIVA. I look forward to seeing Blythe, however. Maybe Gwyneth will do a cameo appearance?

Unlike Sally, Blythe has never won an Oscar. Her spokesperson paycheck from AMGEN, therefore, must be much less than the one Sally received from MERCK. My guess is that AMGEN shot most of its celebrity spokesperson wad when it hired Mickelson (see “Amgen Blows Its Marketing Budget on Phil Mickelson Campaign“).