Are some pharma marketers so focused on figuring out how to promote brands via social media that they are not seeing the plainly obvious unbranded opportunities out there? 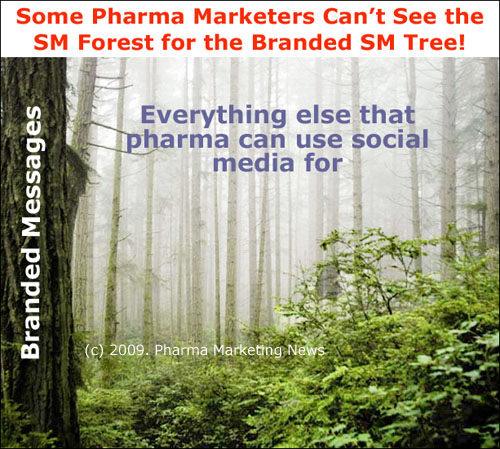 Some time ago, I accused Novo Nordisk of engaging in Twitter “spam” when it posted a Levemir-branded tweet via its @racewithinsulin twitter account (see “Novo Nordisk’s Branded (Levemir) Tweet is Sleazy Twitter Spam!“). You can argue whether or not this was “spam” or “sleazy” or “sleazy spam,” but my main point was that Novo missed an opportunity to support people with diabetes using Twitter and social media tools. This may not be appropriate for the @racewithinsulin twitter account because of its focus on Charlie Kimball. But just as inappropriate was the branded tweet.

Of course, pharmaceutical companies — including Novo Nordisk — are using social media to do unbranded consumer-focused campaigns (see, for example, “Pharma and Healthcare Social Media Wiki“). But are they focusing enough on the many ways they can use social media to support the patients who are prescribed their products? I asked this in a previous post (see “Twitter for Brands: Beyond Marketing.“) and in the survey “What’s Your Opinion About Branded Patient Support via Twitter?“

The issue came up again today during the #hcsmeu Tweetup. The question posed was: Can EU lead way in SM adoption in healthcare?

In the EU, pharmaceutical companies have learned how to communicate with consumers without focusing on branded messages. Therefore, I suggested that “EU pharma can lead way for SM in HC because it is not focused on branded msgs as is US, lots of experience w DA – better app for SM.” Translated from Twitterese, what I meant was that EU pharma’s lead in disease awareness communications makes it easier for them to see the unbranded social media forest than it is for US pharma marketers who are almost catatonically focused on the branded social media tree.

In the US, the only way for pharma to move ahead with social media is to figure out how to get the branded messages into the mix. Without FDA guidance, however, this is not going to be easy. There is hope that the November, 2009 public hearing will move this forward, but history could repeat itself (see “Get Your FDA Social Media Public Hearing T-Shirt!“).

The FDA could take a small step and define the industry’s responsibility to report adverse events (AEs) they come across on web sites — including social media sites — under their control. It’s not really a technology issue. That guidance could simply be something like “No self-reported AEs on social media sites need to be reported by pharma on Form 2253 under the following conditions…” Under a “tit-for-tat tithe” program, the conditions define a “safe harbor” available to pharma companies who commit to spending 10% of their marketing budgets to non-branded disease awareness programs approved by an independent 3rd party.” (See “Tit-for-Tat Tithe on Pharma Marketing. How It Can Work.“)

One safe harbor condition might be placing an AE reporting widget on a product website as in this Ignite Health mock up. (Click on image below for an enlarged view; better yet, visit the web site mock up – the widget actually works, in a demo mode.)

Any way, that’s about as far as I can take this discussion right now. But I do welcome your comments here to this blog post and urge you to take a look at the “Branded Patient Support via Twitter” survey.