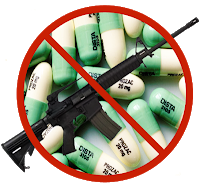 As we learn more about the young man who killed 20 grade school children and 6 adults in Newtown, CT, a few issues have been discussed in the news accounts: (1) he had access to an arsenal of weapons that would be the envy of a Syrian rebel commander, (2) he was trained in how to use those weapons, and (3) he may have been taking medication for the treatment of Aspergers.

While I am told that Aspergers is NOT a mental illness, it certainly is a mental condition/syndrome that may be treated off-label with powerful drugs that “may improve specific symptoms — such as anxiety, depression or hyperactivity — that can occur in many children with Asperger’s syndrome” (Mayo Clinic).

It seems that many other young men who go on a sudden killing rampage have also suffered from mental conditions/syndromes and may have been under some kind of medical care. But we hear very little about how that care (not the syndrome or condition) could have been a factor in causing the rampage.

A quick search of the Internet on “Aspergers drugs side effects” can inform you that kids with Aspergers are “often treated with antidepressant drugs such as fluoxetine (Prozac®, Sarafem®).” According to “My Aspergers Child” blog:

“It is important for parents to work closely with the youngster’s health care provider and to fully understand how to monitor the youngster for side effects of antidepressant medication. In some kids and teenagers, these medications may increase suicidal thoughts and actions.

“Other side effects that should be reported to the youngster’s health care provider immediately include the following:

Perhaps the Newtown mass murderer was taking an antidepressant that increased his “suicidal thoughts.” Knowing what we know about the shooter’s mother, she pulled her son from school to “home school” him in isolation of support groups in the community that may have helped him. She may have also taken him OFF his medication, which may have resulted in increased “aggressive” behavior due to withdrawal effects.

There is ample evidence and warnings from the FDA that certain antidepressants can increase suicidal behavior in teenagers. So medication — or lack of medication — may have been a factor in this and other similar cases. Especially if the medication is prescribed off-label by GPs with little or no experience with mental illness. Pharma companies have pushed these inexperienced physicians to prescribe drugs that should only be prescribed by mental health experts, IMHO.

There is a connection between this line of inquiry and pharma marketing. I just alluded to drug companies marketing anti-psychotic and antidepressants to GPs. Direct-to-Consumer (DTC) advertising also is a factor in the increased use of these medications, but also helps explain why we don’t hear more debate about the role of Rx drugs in murderous/suicidal ramages. Most of the news we have access to — such as the nightly news programs — are funded to a large extent by drug company ads. While these news sources go on and on speculating about increasing the regulation of gun ownership, none that I know of speaks of closer regulation of anti-psychotic and anti-depressant drugs. There is, however, more focus on mental health in general, but most of the focus is on mental health practitioners, not the drugs they may prescribe.

Neither mental conditions, prescription drugs, nor guns alone causes these tragedies, but the combination of the three greatly increases the odds of their occurrence.

Is Pharma Really “Listening” to Patients on Social Media?